RALEIGH, N.C. (AP) — Martin Necas beat Andrei Vasilevskiy at 1:12 of overtime to help the Carolina Hurricanes beat the Tampa Bay Lightning 1-0 Thursday night in the Hurricanes’ return from a pause due to COVID-19 concerns.

Necas scored off a perfect feed from Jordan Staal on the left side, charging in to put the puck past Vasilevskiy’s attempted save. That came after both Vasilevskiy and Carolina’s Petr Mrazek stopped everything that came their way through three periods.

Vasilevskiy made 35 saves, and Mrazek had 31.

The Hurricanes had played just three games before having to shut down workouts and postpone four games due to COVID-19 protocols, the first coming nine days ago. Carolina ultimately had six players go on the NHL’s daily unavailability list, with Staal returning in time to play this game but five others — including forward Teuvo Teravainen and defenseman Jaccob Slavin — still sidelined.

There were no changes to Thursday’s COVID-19 unavailability list from the league for the Hurricanes. Teravainen and Slavin have been on the list along with forwards Warren Foegele and Jordan Martinook since Jan. 19, when the league called off the Hurricanes’ second game with the Predators for its first in-season postponement.

Jesper Fast, an offseason signee from the New York Rangers, was added Saturday.

The short-handed Hurricanes recalled five players to the active roster for the game.

It was the NHL debut for Lorentz, a seventh-round pick by Carolina in 2015.

Hurricanes: Carolina hosts Dallas on Saturday in the first of two games against the Stars, who had a delayed start to their season due to their own COVID-19 issues. 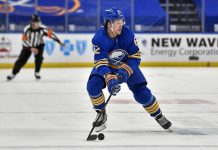 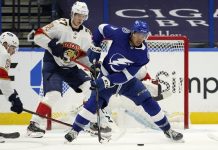 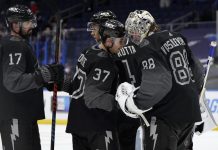