TAMPA — The Philadelphia Flyers pushed and pushed hard in the third period, but when the buzzer sounded early Saturday evening at Amalie Arena, the Lightning had a 5-3 win that extended their win streak to a franchise-tying 10 games while setting the franchise mark with 11 straight wins at home.

It was the third time overall and second time this season that Tampa Bay has won 10 straight. The Lightning joined the 1929-30 and 1970-71 Boston Bruins as the only teams in NHL history with two win streaks of at least 10 games in the same season.

Brayden Point’s goal at 12:34 of the final period seemingly gave Tampa Bay a comfortable 4-1 lead in what was a chippy affair with many post-whistle scrums. However, the Lightning needed an empty-netter by Nikita Kucherov with 22 seconds remaining to seal the victory and let out a sigh of relief.

The third period was a rather srambly one for the Lightning, who allowed a number of odd-man breaks and were outshot 15-7.

“We controlled the game probably for the first 30 minutes,” said Lightning coach Jon Cooper, whose team had the services of Steven Stamkos, Nikita Kucherov and Anthony Cirelli after all three sat out Thursday night’s win over visiting Edmonton with lower-body injuries. “We started running around a little bit and probably took our focus away from the game. We were a little loose in our coverage and definitely loose in giving up odd-mans. Our goalie made some really good saves to preserve the lead for us.”

Andrei Vasilevskiy indeed came up huge a number of times in the final 20 minutes, including against Sean Couturier on a shorthanded breakaway early in the period and on Robert Hagg, who four minutes into the period had an open net from low in the left-wing circle only to be thwarted by the right skate of No. 88.

With the win, Vasilevskiy extended his team-record points streak to 21, a stretch in which he is 19-0-2.

“A winning streak is better than a losing streak,” he said. “We just keep working hard everyday and now we are just trying to avoid a comfort zone and keep playing hard.”

Alex Killorn and Cedric Paquette scored first-period goals to give the Lightning a 2-0 lead. The advantage grew to 3-0 at 2:35 of the second period when Carter Verhaeghe, after taking a right-circle feed from Victor Hedman, elevated the puck over Flyers goalie Carter Hart’s right shoulder.

Following Point’s goal, the Flyers made it a one-goal game on tallies 44 seconds apart by James Van Riemsdyk on the powerplay and Claude Giroux with an extra attacker. Giroux’s goal came with 3:45 remaining and Tampa Bay was able to hold on and ultimately get the empty-netter by Kucherov.

“We are feeling confident, that’s for sure,” said Stamkos, who missed three games, of the 10-game win streak and 22-2-1 run in the past 25. “We are feeling good about ourselves and, for the most part, we are playing the right way. Tonight, we were a little loose and they tried a little bit to get us off our game, but we found a way to win.”

The Lightning, who have gone 21 straight games without allowing more than three goals, embark on a three-game trip that starts Monday night at Colorado where they will seek a team record 11th straight win. The trip also takes them to Vegas and Arizona. 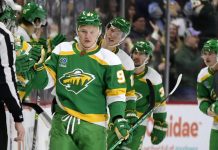 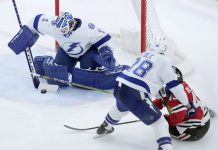