Strengths defeat weaknesses as the Lightning beat the Panthers 8-5

In Sunrise, Florida, amid a select few witnesses, the Tampa Bay Lightning put their quick strike offense on full display Monday night. The Lightning defeated the rival Florida Panthers by a score of 8-5. Steven Stamkos led the scoring with goals in the first and third periods, and the Lightning never trailed despite a night where Andrei Vasilevskiy wasn’t on his best game.

Nikita Kucherov scored his 13th goal of the season as part of Tampa Bay’s attack. After their 0-4 power play performance in their previous game, the Lightning scored on both of their first two power plays. Still, despite the Lightning’s great start and their performance on Monday, the Bolts looked once again like a team suscepitble to easy goals.

The first period was an equal display of the Lightning’s great strengths and their Achilles’ Heel. Every time the Lightning had a lead, no matter how comfortably, defensive issues would come up in order to keep the Florida Panthers in the game.

In the first five minutes of the hockey game, Tampa Bay scored twice. Brayden Point started the action with his sixth goal of the season, just 2:48 into the game. Nikita Kucherov added to the Bolts’ lead with a goal off a turnover forced by Steven Stamkos at 4:55 into the first. Stamkos would round out the Lightning’s first period scoring about ten minutes of gametime later, putting in a power play goal.

Tampa Bay’s quick strike mentality leads to prolonged opportunities for the opponent as the Lightning struggle to hold the puck in their offensive zone. This led to Panthers goals by Aaron Ekblad and Aleksander Barkov. The Panthers continued momentum early in the second period, as Jonathan Huberdeau scored his fifth goal of the season to tie the game 5:32 into the second.

The Lightning have looked like Stanley Cup favorites over the first month of a long season, but they also show a weakness when it comes to puck possession. Because John Cooper demands a shoot-first mentality, which has inspired a frantic Lightning attack, prolonged pressure on the opposing netminder simply isn’t a major part of Tampa Bay’s plan. The kind of offense needed to kill time like that would stall great shooters like Stamkos and Kucherov.

This style of play puts a strain on Tampa Bay’s defenders and goalie. Andrei Vasilevskiy has been excellent in the early going, but the Lightning’s play asks a lot of their netminder. To that end, the Panthers’ first goal came from an odd angle shot that bounced in off Vasilevskiy’s leg pads.

From there, the Lightning’s shooters took over. Ondrej Palat scored on an opportunity created when Tampa Bay denied an attempt from a Florida player at clearing the puck. Yanni Gourde doubled the newfound lead on a power play goal. Vladislav Namestnikov added his fifth goal of the season, making the Lightning lead through two periods 6-3.

The Panthers would narrow the gap ealry in the third on Jamie McGinn;s thikrd goal of the season. With 14:48 still remaining, the Panthers refused to just go away simply in a display the smattering of attendance would have been proud of.

Tampa Bay chased the Florida goalie nearly halfway through the game, as Panthers starter James Reimer was pulled in favor of Antti Niemi despite his previous two games against this year’s edition of the Lightning. Even without spending that much time in the offensive zone, the Bolts’ quick goal abilities were able to chase the game’s starting goalie.

Florida came roaring back in the third, as Jamie McGinn scored to narrow the lead down to 2. Steven Stamkos scored his sixth goal of the season to restore Tampa Bay’s 3-2 lead. Florida’s Evgeni Dadonov narrowed the lead to 7-5, but that was as close as they would get. Anton Stralman finished off the night with the Lightning’s eighth goal, scoring on an empty net in the closing seconds to give Tampa Bay a three goal win.

Moving forward, Tampa Bay cannot afford to let teams set up their offense as often as the Panthers did on Monday night. Cooper and his Lightning have struggled with balancing his desire for players taking their chances on net and Tampa Bay holding the puck long enough to give their defensemen and goaltender rest throughout a game. Offensive explosions aside, a team cannot spend as much of a game on its heels as Tampa Bay had on Monday.

With the win, Tampa Bay improves to 10-2-1 on the season and 21 total points, tied for the most in all of the NHL at the moment. Florida falls to 4-6-1 on the year, dropping down the Atlantic standings in the process.

The Lightning return to Amalie Arena on Thursday night in order to take on the New York Rangers. With just eight points so far, New York is tied with the Buffalo Sabres for last place in the Eastern Conference after three straight 100+ point seasons. It has been a setback year so far for the Rangers, including goalie Henrik Lundqvist and his 3.12 GAA.

So far the NHL has postponed 92 games and the season isn’t half over. 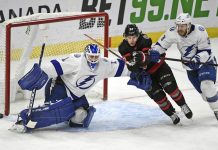 Lightning and the rest of the NHL set to return to play with new CDC guidelines.

Lightning strike for 3 unanswered goals, top Vegas 4-3 in what will be their last game in 2021.

The NHL Has A Big COVID-19 Problem