The Tampa Bay Lightning, playing without Ryan Callahan, Nikita Kucherov, and Ondrej Palat, not to mention Steven Stamkos, were defeated by the Vancouver Canucks 4-2 on Friday night.

Cory Conacher, scoring his first NHL goal since October 11, 2014, tied the game at 2-2 at the 3:53 mark of the third period. “It’s nice to get that first one. It would have been nicer if we got the win out of it, but hopefully I can build off that and it’s a quick turnaround for tomorrow’s game.” Conacher said. Hopefully I can build off that and play well tomorrow and hopefully we can win tomorrow.”

Bo Horvart notched the game winner at the 7:46 mark taking advantage of a lucky bounce on a power play. “We’ve had so many bounces that haven’t gone our way this year,” said Horvat after the game. “To get one like that, it was kind of a relief.”

“It’s tough. Actually, it was a nice save Vasy made just to keep it from going in the net. It goes right to their guy” Jon Cooper said. “It looked like it was a rolling puck. He puts it – it was an unreal shot by him – but he was Johnny on the spot on a fluky play. That was the difference. Too bad.”

“We can’t sit here and say we didn’t play well. They had 10 scoring chances the whole game. They score three goals. You can’t ask our team to do any better than that. Any NHL team will tell you, you give up 10 scoring chances, you’ve got a really good chance to win the hockey game. We’re playing pretty well defensively, a couple breaks here. Unfortunately, some of these turnovers are ending up in the back of our net. In the end, it’s a tough game not to get points out of, that’s for sure.” 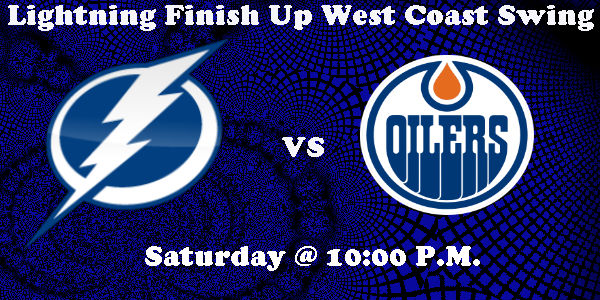 The Lightning will complete their three game road trip as they travel to Edmonton to take on the Oilers.