WIMBLEDON, England (AP) — It says a lot about Novak Djokovic that a two-sets-to-none hole at Wimbledon on a day he was hardly at his best never seemed insurmountable. Not to him. Not to anyone watching.

HEAR ALL THE ACTION LIVE ON RADIO WIMBLEDON – CLICK HERE

Djokovic spotted 10th-seeded Jannik Sinner of Italy the huge lead Tuesday, then worked his way back to win 5-7, 2-6, 6-3, 6-2, 6-2 at Centre Court, earning an 11th semifinal berth at Wimbledon with his 26th consecutive victory at the grass-court Grand Slam tournament.

“I always believed,” said Djokovic, who faces ninth-seeded Cam Norrie of Britain next, “that I could turn the match around.”

Among men, only Roger Federer has made more semifinal appearances at Wimbledon with 13 and won more championships (eight) than the seven Djokovic could reach by lifting the trophy Sunday for what would be a fourth year in a row.

“He makes you play differently — well, not differently, but in a way that he likes,” Sinner said.

Djokovic was responsible for just one of Wednesday’s comebacks: In all four singles quarterfinals on a sunny day, the player who dropped the first set ended up victorious. Norrie edged David Goffin of Belgium 3-6, 7-5, 2-6, 6-3, 7-5; No. 3 Ons Jabeur of Tunisia beat Marie Bouzkova of the Czech Republic 3-6, 6-1, 6-1; Tatjana Maria defeated Jule Niemeier 4-6, 6-2, 7-5 in an all-German matchup. 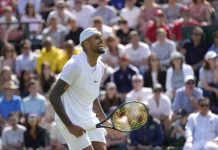 Live audio coverage of Wimbledon: We are getting closer to filling out the quarter finals.