Three-time Grand Slam semifinalist Grigor Dimitrov retired from his first-round match at Wimbledon against American opponent Steve Johnson after having a medical evaluation of his leg.

The 18th-seeded Dimitrov won the first set 6-4 and was trailing 5-2 in the second when the 31-year-old Bulgarian stopped playing on No. 2 Court.

Dimitrov reached the last four at the All England Club in 2014.

Matteo Berrettini, the 2021 Wimbledon runner-up, has pulled out of the grass-court Grand Slam tournament after testing positive for COVID-19.

The All England Club announced Berrettini’s withdrawal and he posted about it on Instagram.

The eighth-seeded Italian was supposed to play Cristian Garín in the first round on Tuesday.

Berrettini is being replaced in the field by Elias Ymer, who lost in qualifying.

Serena Williams makes her return to singles on Day 2 at Wimbledon.

Her last singles match was a year ago at the All England Club when she was injured in the first round.

First up on Centre Court is top-ranked Iga Swiatek. She’ll put her 35-match winning streak on the line against Croatian qualifier Jana Fett. 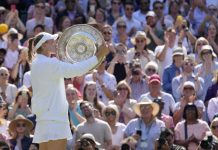 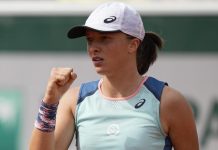