BOSTON (AP) — Creative as they come at deploying their arms, the Tampa Bay Rays overhauled the pitching staff that bolstered an AL pennant winner in 2020 with their signature out-of-the-box approach.

Constructed with the same boldness and imagination as last year’s shut-down crew, this staff hasn’t created quite the same October magic.

Manager Kevin Cash’s fearlessness in deploying a dizzying array of relivers has let them down in Games 2 and 3 of their AL Division Series against the Boston Red Sox. Tasked with covering 11 innings Sunday, eight relievers bent repeatedly before finally breaking in the 13th, when Luis Patiño allowed Christian Vazquez’s walk-off two-run homer in a 6-4 defeat to fall in a 2-1 series hole.

The club that pioneered the use of the opener relied Sunday on 36-year-old David Robertson, who before this season hadn’t pitched in the majors since 2019. There was Patiño, acquired when they traded away Cy Young Award winner Blake Snell, along with Drew Rasmussen and J.P. Feyereisen, picked up in a deal that shipped out popular shortstop Willy Adames

After being handed an early 2-0 lead, starter Rasmussen was chased after just two-plus innings, giving up six hits and three runs, including a home run.

The eight relievers who followed allowed nine hits and three walks but just a single run, giving Tampa Bay’s offense the chance to tie it and force extras. In all that time, first-year Rays pitcher Matt Wisler was the only pitcher who didn’t allow a baserunner, getting four straight outs spanning the seventh and eighth innings.

Vázquez drilled Patiño’s first offering of the 13th — a fastball — just over the top of the Green Monster to give the Red Sox the win.

Patiño was lined up to start Game 4, leaving the Rays with an especially taxed staff facing elimination.

“I’m sure we’ll have a lot of discussions into the night and into tomorrow. Confident everybody that everybody threw one or one-plus is fine to bounce right back,” Cash said. “We’ve got (Collin McHugh) down who didn’t pitch. (Michael Wacha) didn’t pitch, and we’ll find a way to piece it together.”

The Rays took a pitching staff into the postseason in 2020 that was deep and dominant in late innings. But of the 13 pitchers on their ALDS roster this year, none of them made a start in any of the club’s 20 games from last postseason.

Red Sox outfielder Kiké Hernandez, who was a member of the Los Angeles Dodgers team that beat the Rays in last season’s World Series, has made Tampa Bay pay the most often for its pitching shortcomings in Games 2 and 3.

He had three hits, a home run and two RBIs on Sunday. It came after Hernandez had five of Boston’s 20 hits in Game 2, including a homer and three doubles in a 14-6 comeback win.

Meanwhile, Tampa’s offense has struggled to support their pitchers in back-to-back losses.

With the Red Sox starting right-hander Nathan Eovaldi on Sunday, the Rays were hoping to get a lift with lefties Austin Meadows, Ji-Man Choi and Joey Wendle in the lineup for the first time this series.

Meadows hit a two-run home run in the first inning to put Tampa in front and Wendle also had a hit. But the rest of the lineup struggled, with the Rays stranding seven runners on base.

It’s all left a team that won a club-record 100 games this season and made winning the AL East look easy now in search of quick answers.

With a short turnaround for Game 4 on Monday night at Fenway, it will now require even more ingenuity on Cash’s part if the Rays hope to save their season. 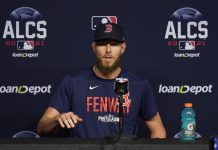