And with the 6th pick in the 2017 Draft, the Orlando Magic swung for the fences with the selection of Jonathan Isaac. The Florida State freshman is a risky pick, but at the same time, has the potential to turn around the franchise. Isaac is a very skilled big, who can do pretty much everything when the ball is in his hands. This is mostly due to his late growth spurt, as he grew up playing guard. And at only 19 years old, Isaac may still have another inch or two left in him. The 6’10” forward will still need to grow into his frame, as he is just over 200lbs. But with some time spent in the weight room, that shouldn’t be a problem.

Now what made Isaac so attractive to Orlando is that he is a two-way player and can make an immediate impact at both ends of the floor. Isaac has the ability to be a lock down defender at times and really excels in the pick-n-roll. Isaac also has one of the highest ceilings in the draft and could one day turn in to a perennial All-Star, something that Orlando has been seeking since Dwight Howard left town.

While at FSU Isaac averaged 12 points while pulling down over 7 boards a game. He is also a shot blocker, with over 1.5 blocks per game. His size and speed give him the upper hand against most opponents. On the offensive end, Isaac is solid from downtown, shooting 34% from downtown. He can also dice up opposing defenses with his ability to get to the rim. 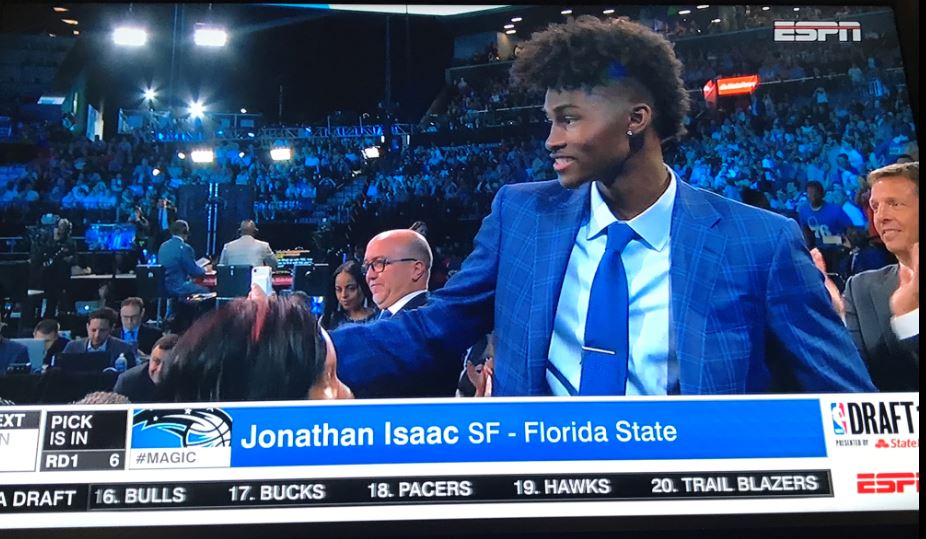 Now depending on when he can crack coach Frank Vogel’s rotation, it would not be surprising to see Isaac sent to play with the Lakeland Magic of the D-league on days off. This is quite common for teams that have D-League affiliates in their backyard. It could also be used just to boost his confidence at the offensive end, which is one of the few knocks against Isaac.