St. Petersburg, FL – The Tampa Bay Rays defeated the Los Angeles Angels 13-3 on Saturday afternoon to extend their win streak to four in a row.

Shane McClanahan (3-2, 4.09 ERA) picks up the win for Tampa Bay who improve to 47-31 on the season and 6-0 against the Angels in 2021. The Rays have won 16 of their last 19 games at home after starting the season 7-12 and they improve their record against former Manager Joe Maddon to 8-2. Drew Rasmussen worked a scoreless inning in relief of McClanahan and Louis Head finished the final two frames with scoreless relief.

McClanahan was charged with three earned runs in six innings of work on just four hits while striking out seven and walking two. The Rays offense provided plenty of support banging out 14 hits including homers by Manuel Margot and Mike Zunino. Tampa Bay scored twice in the second inning, four in the fourth, single runs in the fifth and sixth, and five in the seventh.

Everyone in the lineup with the exception of Wander Franco had a hit and seven different players scored a run. They were an impressive 6-for-11 with runners in scoring position after going just 13-for-85 in their previous 10 games. In what is always a good sign, seven of the Rays 13 runs were scored with two outs.

Ji-Man Choi had his first four hit game of his career and Randy Arozarena had his second career four hit game (also May 20th versus Orioles). Austin Meadows followed up his three hit performance with a pair of hits, marking his 16th multi-hit game of the season (tied for second on the Rays).

Manuel Margot put the Rays up 2-0 in the second inning belting a 2-run homer off Alex Cobb. It was his eighth homer of the season and his fourth homer in his last 17 games compared to just two homers in his previous 39 games. He has reached base in 16 of his last 17 games.

The Angels batted around in the third inning scoring three times to take a 3-2 lead. They forced Shane McClanahan to throw 36 pitchers but left the bases loaded after a two out error by Wander Franco extended the inning. Juan Lagares led off the inning with a double and moved to third on a seeing eye single off the bat of David Fletcher. Fletcher’s hit extended his batting streak to 11 straight games. Shohei Ohtani followed with a double that bounced over Ji-Man Choi’s head scoring Lagares with the Angels first run. Anthony Rendon gave the Angels a 3-2 lead with a bloop double to right scoring both Fletcher and Ohtani.

It was a frustrating inning for McClanahan as the hits were extremely weak contact. Shohei Ohtani’s RBI single was 29 miles per hour off the bat and Anthony Rendon’s 2-RBI double left the bat at 65.9 mph. To his credit, he even didn’t wilt after Wander Franco’s 2-out error extended his inning.

“Personally I’m so impressed with Mac [McClanahan] and the way he went about it.” Kevin Cash said after the game. “That was a very frustrating inning when they scored the three runs. It’s baseball, they didn’t hit a ton of balls hard. We’ll take runs that way as well. For a young pitcher he did a tremendous job of keeping his composure. Frustrated after the inning but was able to kind of reset his mind and give us three innings after that. So very very impressed with his overall outing.”

McClanahan credits pitching coach Kyle Snyder with helping him reset after the inning. “Snydes [Kyle Snyder] made a good comment to me when I came to the dugout.  He goes, ‘you got the weak contact its out of your control.’ That kind of gave me the ability to reset and understand that if I keep making pitches good things will happen more than not.”

McClanahan showed poise and the ability to reset/refocus after the soft-contact damage in the inning. After Franco’s error, McClanahan buckled down to retire the final 10 batters he faced.

“Young guys like Shane. Their first year, that’s all we ask from them.” Brett Phillips said of McClanahan’s bounce back. “If they give up a few runs to come back the next inning and settle down and compete. He did a heck of a job competing the rest of the game like he did. Shout out to him. I think we can all learn from that – all our pitchers and hitters as well – you get knocked down keep going.”

Tampa Bay scored four times in the bottom of the fourth inning highlighted by key 2-out hits by Joey Wendle and Brett Phillips to take a 6-3 lead. Randy Arozarena led off the inning with a single and moved to third on a 1-out single by Ji-Man Choi. Alex Cobb retired Manuel Margot on a pop out to second for the second out of the inning. Joey Wendle picked Margot up with a 2-out RBI single to tie the score at 3-3. Brett Phillips followed Windle’s RBI single with a 2-RBI triple off the centerfield wall, ending an 0-for-15 skid, scoring both Wendle and Choi and giving the Rays a 5-3 lead. He then scampered home on a wild pitch to cap the inning with the Rays on top 6-3.

“I didn’t know that [0-for-15 skid], I never, my mind set is all the same when I walk up the plate.” Phillips said. “I’m 0-for-0, I’m here to help the team win any way I can.  That’s the mindset I feel like you have to have in this game. Each and every day showing up fresh and doing whatever you can to help this team win. That’s what I try to do on a daily basis.”

Alex Cobb departed the game after the fourth inning allowing six earned run on six hits striking out three and walking one. Randy Arozarena doubled with one out, moved to third on a wild pitch, and scored on a 2-out RBI single by Ji-Man Choi extending the Rays lead to 7-3.

Mike Zunino hit a towering homer, his 16th homer of the season, off Jose Quintana in the sixth inning to give the Rays a 8-3 lead. It was his fourth homer in his last seven games. His 16 homers extends his single season franchise record for homers by a catcher (while playing the position).

Quintana departed after the sixth inning. In his two innings of work he allowed a pair of earned runs on four hits striking out three and walking none. He was replaced by Jose Quijada.

Quijada walked Randy Arozarena to lead off the bottom of the seventh. Arozarena moved to third on a long loud double off the bat off Austin Meadows. Ji-Man Choi doubled to score Arozarena with Austin Meadows moving to third. Manuel Margot walked to load the bases. After Joey Wendle struck out Brett Phillips singled to plate Meadows and Ji-Man Choi followed him home as Luis Rengifo‘s throw home was off-target. Phillips hit ended the afternoon for Quijada who was replaced by Junior Guerra.

The Rays and Angels will wrap up their three game series. The Rays starter has yet to be officially named but it’s expected that Ryan Yarbrough (4-3, 4.59 ERA) will either be the starter or work the bulk of the innings following an opener. The Angels will send left-hander Patrick Sandoval (2-2, 3.69 ERA) to the mound.

Prior to the game, Josh Fleming was placed on the 10-day injured list with a right calf strain. Pitcher Louis Head was recalled from Triple-A Durham to take his spot on the roster. 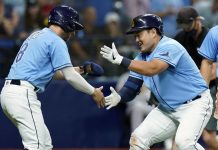