BRISTOL, Tenn. (AP) — Kevin Harvick was on his annual family beach vacation when he was forced to cut it short early by three days to return to work for the first time in his career on Easter Sunday.

NASCAR since its 1949 inaugural season deliberately used Easter as an off weekend — often the first natural break in a 38-race season — and industry personnel slotted that week for a rare vacation. Weather-related rescheduling actually led to 10 races on Easter Sunday over the years, most recently in 1989 when a snowstorm forced a scheduling change, but NASCAR never deliberately chose the date.

NASCAR executive Ben Kennedy, great-grandson of NASCAR’s founder, worked with Fox to schedule the second Cup Series race on dirt-covered Bristol Motor Speedway for Sunday night under the lights in a bid to attract a larger television audience.

“When you think about all the other sports leagues with NFL on Thanksgiving, NBA on Christmas, this is our opportunity to run on Easter Sunday and drive a lot of momentum for our fans that are watching at home,” Kennedy said when the race was announced. “We put a lot of consideration into family time. Having it later in the day, and on primetime on Sunday, we want to make sure that for fans, families, team members, drivers, that they have the opportunity to celebrate earlier on in the day.”

But as Harvick returned from the beach earlier than planned, he warned the decision to race Sunday night better have a monstrous payoff. In scheduling Bristol for Easter, NASCAR stripped the premier Cup Series of all but one off weekend spanning from February until November.

But not everyone is onboard as deliberately racing on Easter is unheard of in a sport that begins each event with an invocation and an optional Sunday pre-race church service. Bristol Motor Speedway has scheduled a live Easter Celebration Worship Service at the track to be held three hours before the green flag.

“Not a big fan of racing on Easter. I feel like that’s a very special day, a day that’s equally as big as Christmas, if not bigger, so I’m not crazy about it,” said defending race winner Joey Logano. “I also understand where it makes a lot of sense for a sport to do it. But it’s different than other sports. When other sports compete on holidays, it’s a couple teams here and a couple teams there. This is 40 teams.

“Maybe, it’s going to be fantastic. I’ll have my family with me so that’s good, but it’s going to be a lot different Easter than what we’re used to. Having a church service for industry, I think that that part is good.”

“I think Easter night works really well into the schedule for people at home, they can go to church, go to lunch and Easter night you can watch a race,” Smith said. “And Easter for a lot of people is a travel weekend and we’re giving everybody a place to travel to right here — enjoy a NASCAR weekend and enjoy Easter and we’re going to have a really fantastic service.”

Kyle Larson is the FanDuel favorite at 9-2. … The conversion of Bristol to a dirt track last year was the first Cup race on dirt in 50 years. But NASCAR had early experience on the surface prior to the Modern Era with 501 races on dirt from 1949 to 1970. Jim Roper in a Lincoln won the first Cup Series race on dirt in 1948 on 0.75-mile Charlotte (Old) Speedway. … NASCAR has had 77 different drivers win on dirt, led by Hall of Famer Lee Petty with 46 victories. …. Chris Tomlin, a Grammy Award-winning worship leader, and pastor Max Lucado will headline a live pre-race Easter celebration service. Rascal Flatts lead singer Gary LeVox will perform. 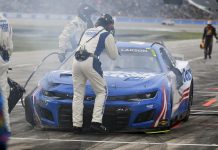 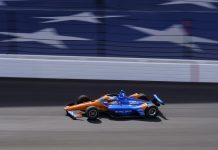