It’s never too early to get ready for the NFL regular season. With the recent conclusion of the NFL draft in April, the league and fans turned their attention to the official unveiling of the 2021 season schedule.

On Wednesday, May 12th the NFL released the schedule for all 32 teams, and week 1 is filled with several great matchups, including the defending Super Bowl Champion Tampa Bay Buccaneers taking on America’s Team, the Dallas Cowboys.

Week 1 is a little more than 4 months away but the journey towards Super Bowl 56 has already started as teams are starting to inch closer to rookie minicamps. In preparation for the NFL season, check out our preview of marquee week 1 matchups and early betting odds aggregated from several top online sportsbook by MichiganSharp.com.

Traditionally, the NFL kicks off its regular season by featuring the defending Super Bowl Champions in a Thursday Night Football game. This year the tradition continues and it doesn’t get much bigger than Tom Brady leading the Tampa Bay Buccaneers versus Dak Prescott and the Dallas Cowboys on Thursday, September 9th.

The Buccaneers will play host to the Cowboys who are looking to rebound from a disappointing 2020 season, where they missed the playoffs. Additionally, the Cowboys are looking forward to welcoming back their star quarterback, Dak Prescott, who is returning from a torn Achilles and is hoping to make his debut in week 1.

The Bucs on the other hand are coming off a magical Super Bowl run led by Tom Brady who beat Drew Brees, Aaron Rodgers, and Patrick Mahomes on his way to his 7th Super Bowl ring and first with the Bucs. Expectations are high for the Bucs as they are considered as one of the favorites to win Super Bowl 56 next to the Kansas City Chiefs.

Oddsmakers across the country have already digested the news of the NFL schedule release and have begun to release the betting odds for week 1 and beyond. Florida sports betting apps aren’t legal yet and likely won’t be available for week 1 but it’s worth tracking the odds for the Cowboys vs. Buccaneers so you are ready when it is available.

With Dak Prescott’s health in question, it’s no surprise that oddsmakers at FanDuel, DraftKings, BetMGM, and elsewhere have the Buccaneers as -6.5 favorites. In fact, you could argue that this is the best you’ll see the line since it’s rather unlikely Prescott will be playing week 1.

Since it’s still early, odds are fairly competitive across sportsbooks and you likely won’t encounter many differences no matter your sportsbook of choice.

Nevertheless, it should be an interesting game to watch. The Cowboys should have a much-improved defense, especially having drafted linebacker Micah Parsons at #12 in the 2021 NFL Draft — who should be an impact player during year 1. The Bucs on the other hand will be looking to find a rhythm early something they failed to do during week 1 last year when they lost to the Saints in New Orleans.

If you’re looking to capitalize on the early lines for week 1 FanDuel, DraftKings, and BetMGM are now accepting wagers for all NFL games (in addition to future bets). Each sportsbook offers a promotion for new players, which typically includes a deposit match bonus and/or a free bet.

Later in the week fans should be able to get the first glimpse at #1 pick Trevor Lawerence as he and the Jacksonville Jaguars will be traveling to Houston to take on the Texans. If healthy, Lawrence is expected to make his debut week 1 alongside first-year head coach Urban Meyer.

The Texans will be without J.J. Watt, who is now with the Arizona Cardinals, and likely will be without their franchise quarterback DeShaun Watson, who is battling off-field sexual assault allegations.

Elsewhere in the NFC, the Green Bay Packers will be face-off against division rival, the New Orleans Saints. However, this will be the season for the Saints without Drew Brees since 2005 as Brees called it a career after the 2020 season and the Packers may be without Aaron Rodgers who is rumored to have requested a trade.

Speaking of trades, the Indianapolis Colts will have an opportunity to showcase their new franchise quarterback, Carson Wentz, who they acquired in a trade from the Philadelphia Eagles. Wentz and the Colts will host Russell Wilson and the Seahawks — a battle between two teams expected to make a deep run in the postseason.

Week 1 of the season concludes with a Monday night game between the Las Vegas Raiders and the Baltimore Ravens. The Raiders started off 2020 with playoff hopes but ultimately ended up missing the postseason, while the Ravens failed to get past the Buffalo Bills in the Divisional Round. 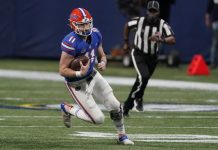 Why aren’t the Super Bowl Champion Buccaneers getting any respect heading into the 2021 season from the NFL experts?