Corey Perry added a pair of goals, Ondrej Palat, Brayden Point, and Pat Maroon chipped in one apiece. Hugo Alnefelt started for the Bolts and played the entire game stopping 39-of-44 shots.

Carolina was paced by C.J. Smith who scored a pair of goals. Derek Stepan, Spencer Smallman, and Jordan Martinook also scored. Antti Raanta made 18 saves for Carolina who fall to 1-1 on the preseason.

Gabriel Fortier made an impression on Lightning Coach Jon Cooper. “He’s a competitor. He’s fast. And he was great on the PK. He earned his goals tonight,” Lightning head coach Jon Cooper said*. “He had three, probably thought he was going to have four. That post got in the way a few times. He just competes hard. I don’t want to start comparing him to people because then that’s an unfair moniker, but you win with guys like Fortier. He’s got a lot of growing to do in his game, but he’s just one of those guys that he’s gotten better every year and he competes. You want those guys. So, if he keeps going here, we’ll see what happens here down the stretch, but he’s definitely made a name for himself, so good for him.”

The Bolts travel to Nashville on Saturday to take on the Predators completing a three-games-in-three-nights stretch. Puck drop is at 8 p.m. EST. 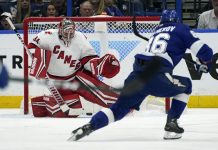 Lightning aims to secure a series win over the Hurricanes tonight in Carolina. Early start 6:30 pm on NBC Sports Network 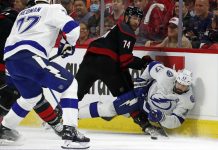 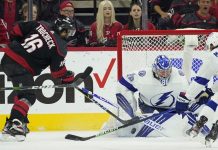 With Tampa Bay up 2-0, the Hurricanes hoping for series-changing bounces. Game 3 tonight at 8 pm in Tampa on USA