Hurricanes aren’t known for being easy to deal with

Like a lot of you, I woke up this morning and immediately checked my phone to see if there was an update on what the NFL was going to do regarding the Buccaneers’ season opener at Miami, which for obvious and frightening reasons cannot be played in Miami on Sunday.  When I found out that the game had been postponed until week 11, thus erasing both teams’ bye weeks and making them play sixteen NFL games in sixteen weeks, my initial reaction was disappointment.

To me, there are football ramifications to this that are not good.  It makes both teams’ schedules look much more intimidating, as they went from having a late bye week to having none at all.  This might make players more likely to get injured late in the season, and in general will be an added challenge in an already notoriously tough league.

1:  Football is extremely unimportant right now, as there are currently Floridians on highways evacuating early.  They do not know when they will be able to return home or what home will look like when they get there.  Lots of them are going to see family and be with them, but not everyone has family somewhere out of the storm’s path.  Some people are going to hotels, others have to go searching for those hotels that allow pets.  The NFL did the right thing making a decision early that would get them out of the way while people deal with much more important stuff.

2:  Whether or not you believe this was the best possible option, none of the choices in front of the league were good. 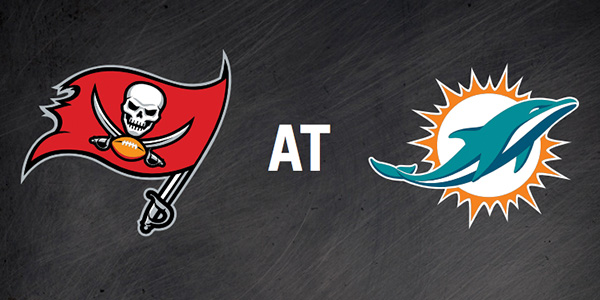 Let’s consider relocation, the option that many football fans would have preferred to moving the game to week 11.

As of yesterday, people were floating everywhere from New Orleans to Carolina as potential landing spots for the game.  Of course, both of those cities are also potentially going to have to contend with Irma, so they wouldn’t be real choices, nor would any large college stadiums in Louisiana, Alabama, or the Carolinas.  The teams could not play anywhere close to home.

The likely landing spot, if the NFL had taken this route, would have been either Philadelphia or Pittsburgh, as both of Pennsylvania’s pro teams are on the road.  Those two cities are somewhat lacking for Dolphins and Buccaneers fans.

Where else could the game go?  Well, perhaps St. Louis would stop laughing long enough to consider letting the NFL crash there for an afternoon.  That consideration would not last long, and it would result in a no.

On top of this, of course, the Dolphins are already sacrificing a home game to London, so relocation would leave them with five home games.  Should Dolphins fans really be punished because of this?  Of course not, and switching that London game back to Miami would have been far more complicated than just crossing off one word on the schedule and writing another.  As it stands, the Dolphins are already going to have to wait until October to play their first home game of the season now.  At least let them get as many games for their fans as possible.

Oh, right, the fans.  The people who are actively considering evacuation or, in some cases, actively evacuating.  To say people in the path of Irma (or even the potential path of Irma) have bigger things on their minds is an understatement.  Football does not matter right now.  Being prepared and safe matters.

That said, let’s consider how relocation would not be good for fans of either team.  With evacuation of both cities still very much a possibility, a relocated Bucs-Dolphins game would be hard for people to watch.  Those who had to go to safety are not going to be in either team’s market.  Even if they were, no matter how much they might need a distraction it would be hard to sit down and watch the game with so much more on their minds.

Certainly, it wouldn’t turn evacuation into an impromptu family trip to the Steel City.  The game wouldn’t sell out, no matter how many people wanted to chip in and help.  In fact, with the game running up against the Steelers game played at the same time, it would draw fewer fans than a low-level high school game.  Maybe there would be a couple of people who became Dolphins fans because of Dan Marino, but it would be a poorly-attended game that few people would be able to watch.

Then, of course, there are the Dolphins and Buccaneers themselves.  Yes, like the Marlins, they could take their families on the road with them to safety, but they will still be leaving their homes behind.  It might be hard to keep your mind on the game plan when that’s going on, especially for the players with more direct ties to Florida than simply being employed there.

Oh, without a bye week player safety is going to come up.  Listen to any football coach on any level, however, and they will insist that nothing gets a player hurt like that player losing focus.  Distracted players get hurt.  Players playing at less than 100% get hurt.  You want a player safety issue, how about a receiver who for just a moment is distracted by everything anyone would be worrying about in that situation?  How about an entire team of players who must get to the locker room so they can find out what’s going on?

In other words, even the football game wouldn’t be about football.

We’re all hoping the hurricane pushes away, that as few people as humanly possible will end up in the path of such a historically intimidating weather pattern.  It would be great news if the worst thing Florida loses to the storm ends up being a couple of bye weeks.  What’s at stake makes football seem like what it truly is; an entertaining distraction.

The lack of a bye week can be worked around.  Perhaps the NFL will find a way to “flex” a couple of games here and there for both teams to give them a little rest.  If these teams are lucky they might find themselves on the good side of a blowout win early and get to rest starters.  Maybe the coaches will get creative and find ways to make up for it.  With any luck, the NFL will think of a way to make it up to Dolphins fans that, through circumstances beyond anyone’s control, the Dolphins’ first “home game” will take place in the United Kingdom.

The decision made this morning was not necessarily an ideal one.  There were no good options on the table, something a lot of people in the path of this storm can identify with.  Like everyone else, the league can only stay prepared and act quickly.  The NFL lucked out here, having a mutual open date between the two teams.  Otherwise, a relocation would involve a logistical nightmare, and could be a nightmare for players as well as the other team personnel who would be involved.

In recent years the big shield hasn’t done the best job of leading by example in much of anything.  On Tuesday and Wednesday, the NFL led by example.  Be prepared, make a plan, act quickly, avoid panic.  If a couple of bye weeks are the damage done, trust me, you’ll think much differently about that come November when you get a bonus Bucs game.

We talked about the postponement today on The Sunshine Boys podcast, where Ira Kaufman and Joe Henderson also interviewed Mickey Mantle’s son Danny talked about The Mick and about keeping the legacy going with some unique new memorabilia.