The President of the International Olympic Committee, Thomas Bach, creates illusions. The Olympic movement is not about politics, Bach has been wrong during his tenure as the IOC head. It is always about politics going back to banning women from competition in the early 20th century to the 1936 Hitler Games in Berlin when the US Olympic head Avery Brundage said that a Jewish-Communist conspiracy was urging an American boycott of those Games. South Africa was tossed from the Olympics in 1964 because of apartheid. It should not be much of a surprise that athletes in the 2022 Beijing Winter Games have to live within the boundaries of China’s rights for expression. Athletes who speak out about human rights conditions, no matter where they live, could be arrested for talking and Bach does not want that at all. There is an IOC rule 50 which prohibits athletes from protesting. Bach said athletes should not be worried by Chinese authorities.

Yang Shu, the deputy director general of Beijing 2022’s International Relations Department said that protests that violate “the Olympic spirit” or are “against Chinese laws and regulations” would be “subjected to certain punishment”. It is not just athletes who face possible jail time, take the case of a Dutch public broadcaster. Recently, the NOS complained that, “our correspondent was pulled away from the camera by security guards at 12:00 pm live in the NOS Journaal. “Unfortunately, this is increasingly becoming a daily reality for journalists in China. He is fine and was able to finish his story a few minutes later.” Meanwhile the International Olympic Committee was fine with the NOS incident. “These things do happen and I think it’s a one-off,” IOC spokesperson Mark Adams told Reuters. The IOC put the 2022 Games in Beijing because no one except Kazakhstan wanted the Games. The IOC took China. 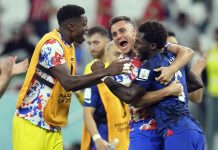