Carey Price stared at the puck in the net behind him in a must-win Game 3 of the Stanley Cup Final.

Staring right back at Price and his Canadiens teammates is a near-impossible deficit, down 3-0 to the Tampa Bay Lightning and facing the prospect of elimination in Game 4 Monday at home. After Montreal counted on him so much to get through the playoffs, Price appears to be wearing down, and some very stoppable shots going in have contributed to this situation.

“We win as a team, we lose a team,” coach Dominique Ducharme said in French after the 6-3 loss Friday night. “We all want to do better.”

Still, the Canadiens need Price to play better than he has the past two games.

He was beaten clean twice in the first four minutes by Tampa Bay defensemen Jan Rutta and Victor Hedman as part of a terrible start to Game 3 that wasn’t all on Price. Tyler Johnson scored twice off bad rebounds that were very un-Price-like.

Even Game 2 wasn’t his finest hour. Price gave up a goal to Anthony Cirelli on a seemingly harmless shot and a backbreaker to Blake Coleman, who knocked in the puck diving with one hand with 1.1 seconds left in the second period.

Asked how he felt he was playing this series, Price said: “I can definitely play better. It’s just not good enough so far.”

The Canadiens as a team haven’t been good enough to handle a deep, talented Lightning opponent that knows how to win in the playoffs. They started the final by successfully getting traffic in front of Price and scoring goals on shots he couldn’t see or be blamed for.

“We count on Carey being the rock back there and he always is,” Canadiens assistant coach Luke Richardson said this week. “We need to make sure we supply him with enough support up front.”

While it’s true the Canadiens could offer more support for Price, they could use a timely save from him in this series. He has made some jaw-dropping stops here and there, but also has allowed 13 goals through three games — the same as the entire semifinal against Vegas — and has a pedestrian .835 save percentage.

Meanwhile, Andrei Vasilevskiy — who had a margin for error for a soft goal or two in Game 3 — has stopped 92 of 97 shots for a .948 save percentage. That has him in the conversation for the Conn Smythe Trophy as playoff MVP, which Price won as the best player in hockey six years ago.

“They need Carey Price to be on par with Andrei Vasilevskiy,” NBC Sports analyst Ed Olczyk said. “So far, Vaslievskiy has outplayed Carey Price without question.”

The big question going into the final was whether Price could steal a game or even the series for Montreal. That’s what he did in previous rounds to get the Canadiens to this point, and their style is dependent on getting the lead and leaning on the 33-year-old Price.

The Canadiens have yet to lead in the final and Price has yet to steal a game, much less put Montreal on track to win the series. After a grueling, condensed 56-game regular season and now 20 playoff games, this is not the Price who dominated for Canada on the way to the gold medal at the 2014 Sochi Olympics or the title at the 2016 World Cup of Hockey.

Performances like that made for praise from Lightning coach Jon Cooper like: “Carey Price has a demeanor about him that it exudes confidence. And he has an ability to turn the page. He has an ability to play at big moments, and he’s grown into that.”

In the Cup Final, the biggest moment for the Canadiens, Price has been one of Montreal’s biggest weaknesses. And the Canadiens have little ability to come back in the series unless Price rights his game. 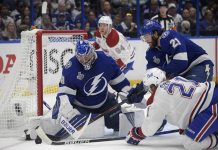