NEW YORK (AP) — Lamar Jackson and the Baltimore Ravens will start the postseason as the hottest team in the NFL. The Ravens, who finished with the league’s best record at 14-2, ended the regular season on a 12-game winning streak

Jackson, a likely contender for league MVP, and the Ravens are closing the season on top of the final AP Pro32 poll of 2019, too.

For the fifth consecutive week, the Ravens earned all 12 first-place votes for 384 points in balloting Tuesday by media members who regularly cover the NFL. In fact, the top five teams all stayed the same from the previous week.

The Ravens will begin their hopeful drive to the Super Bowl on Jan. 11 in the divisional round of the playoffs.

The New Orleans Saints remained No. 2. Despite finishing tied for the best record in the NFC at 13-3, the Saints will play on wild-card weekend as they host the Minnesota Vikings on Sunday. The Vikings moved up a spot and finished at No. 8.

The San Francisco 49ers, who held off the Seattle Seahawks on Sunday night for the NFC West title and home-field advantage throughout the playoffs, remained at No. 3. The Seahawks moved up a spot to No. 6 despite the loss and will have to travel across the country to Philadelphia to play the NFC East champions on Sunday afternoon. Like the Ravens, the 49ers will also open the playoffs at home on Jan. 11.

“The NFC’s road to the Super Bowl goes through Northern California and the league’s stingiest pass defense,” said Ira Kaufman of Fox 13 in Tampa, Florida.

The Kansas City Chiefs stayed at No. 4 and earned the other bye in the AFC after the New England Patriots lost at home to the Miami Dolphins.

The Patriots slipped a spot to No. 7 and will open defense of their Super Bowl title as they host the Tennessee Titans on Saturday night. It’s the first time since 2009 the Patriots will play on wild-card weekend.

Aaron Rodgers and the Green Bay Packers remained at No. 5 and grabbed the other first-round bye in the NFC after rallying past the Detroit Lions.

The Buffalo Bills and Houston Texans, who will open the postseason in an AFC matchup on Saturday, rounded out the top 10. The Bills slipped a spot to No. 9 after losing to the New York Jets and the Texans stayed in the same spot for the third consecutive week. 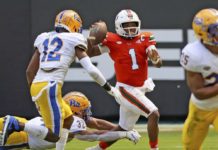 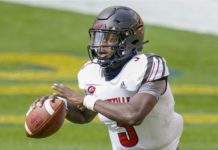 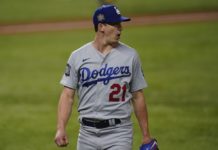 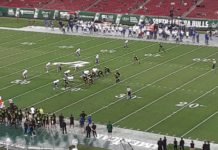