The Tampa Bay Rays slugged four home runs en route to a 9-4 victory over the Cleveland Indians on Saturday.

The win improves the Rays to 79-58 on the year and into a tie for the second wild card with the Oakland Athletics who were defeated by the New York Yankees earlier Saturday. After winning three in a row on the heels of a four game losing streak, the Rays find themselves just just 1/2 game behind the Indians for the top wild card spot.

Jalen Beeks (6-3, 4.41) worked three scoreless innings allowing four hits while striking out one without issuing any walks in picking up the win. Emilo Pagan came into the game in the ninth and retired the final two batters in picking up his 16th save on the season.

Beeks departed the game in the fifth inning with one out and a runner on first. The dangerous Francisco Lindor was due up and Kevin Cash called on Oliver Drake to turn the switch-hitting Lindor to the left side. The right handed Drake entered the game holding left handed batters to .162 average (11-for-68) while right handed batters are batting .257 (19-for-74).

The move paid off for the Rays as Drake was able to get Lindor to hit into the double play and end the inning. Lindor was the only hitter Drake faced. Nick Anderson and Chaz Roe each worked a scoreless inning.

Ricardo Pinto entered the game in the eighth inning and allowed a Francisco Lindor 2-run homer. Kevin Cash, hoping to avoid having to use Emilio Pagan, stuck with Pinto to open the ninth. Unfortunately, Pinto was not up to the task of putting the game away quietly and allowed a pair of runs while retiring just one batter. Cash had to summon Pagan with Tampa Bay leading 9-6 and a runner at second. Pinto became the 31st pitcher to appear for Tampa Bay this season, tying the franchise mark set in 2018.

Emilo Pagan struck out Yu Chang and then got Francisco Lindor to pop out to Eric Sogard to end the game. For his effort he picked up his 16th save on the season.

Zach Plesac (7-5, 3.61 ERA) allowed four earned runs on six hits while striking out four and walking one in taking the loss for the Indians who fall to 79-57 on the season.

Diego Castillo issued a 1-out walk to Oscar Mercado which preceded a 2-run homer by Carlos Santana giving the Indians a 2-0 first inning lead. It was Santana’s 31st homer of the season.

Choi Cuts Lead In Half:

Ji-Man Choi opened the home half of the second by blasting a homer to right to cut the Indians lead to 2-1. It was Choi’s 13th homer of the season and third homer in his last 15 games. Choi finished the game with three hits, tying his season high and has now homered twice in the last four games. He has hit safely in in five of his last six games following an 0-for-10 skid.

Tommy Pham delivered a 2-run homer in the bottom of the third inning to give the Rays a 3-2 lead. It was Pham’s 20th homer of the season and first since August 19th against the Seattle Mariners. It marks the third time in his career that he’s had at least 20 homers in a season. He’s on pace for a career high 24 homers.

In what can only be a good sign for Pham and the Rays, Pham revealed that the strength in his hand is improving saying that he increased to 60-pounds on the dumbbell. He was down at 25-pounds when the injury first flared up.

“I have a saying, if you want to hit home runs you have to practice hitting home runs.” Pham said. “Mark Reynolds and Matt Holiday used to always say that. I haven’t been hitting home runs in BP (batting practice) because of my hand. Today, with my hand feeling better I hit some home runs and that’s a good sign”

Avisail Garcia hit his 18th homer of the season, a 2-run shot, that extended the Rays lead to 5-2 in the bottom of the sixth. It was Garcia’s first homer since returning from the IL with an oblique strain and his first homer since August 12th in San Diego.

Matt Duffy walked, Joey Wendle was hit by a pitch, and Eric Sogard delivered a 2-out RBI single to push the Rays lead to 6-2.

Travis d’Arnaud homered to lead off the seventh giving the Rays a 7-2 lead. It was his 15th of the season, one shy of his career high of 16 set in 2017 with the Mets.

The Rays loaded the bases after d’Arnaud’s blast for Matt Duffy. Carlos Santana made a diving stop of Duffy’s grounder down the line, tagged first but threw wildly to the plate allowing both Ji-Man Choi and Avisail Garcia to score giving Tampa Bay a 9-2 lead.

Tampa Bay and Cleveland will conclude their season series. The Rays enter the game with a 5-1 advantage in games played head-to-head this season. 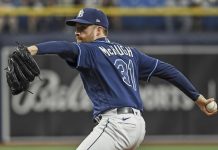 5 Rays pitchers no-hit Indians for a doubleheader sweep. Jays return to the area for the weekend series.