Last year in Orlando Florida I asked Kevin Cash if, with the versatility of the roster, if he’d consider going to an eight man bullpen during parts of the season where an extra arm could help.  He started his answer with “I’d go with a 10-man pen if I could.”

Rays manager Kevin Cash has been consistent with his desire for a more flexible staff at his disposal. Little did I know last year that the opener strategy was going to be unleashed in 2018 giving the Rays manager the pitching flexibility he so desired.

This year, in his press scrum in Las Vegas, the issue of roster improvement was once again brought up.  When pressed on what he’d like the team to improve upon this winter Cash noted how consistent he’s been since being a coach with the Cleveland Indians.

“It’s all about pitching. Pitching, pitching, and pitching. I don’t think you can ever have enough. Obviously the bats are nice, but we won a lot of games last year because we pitched well and we caught the ball behind our pitchers and I know that’s not going to change.”

Even if a traditional starting pitcher is signed off the free agent market or is acquired via trade, Tampa Bay plans on continuing use of the opener 2-3 times through the rotation in 2019.

“We had success with it,” Cash told MLB Network Radio. “We watched guys develop and it allowed them an easier path to develop at the major league level which we all know is very challenging. When you first introduce your career to the big leagues, for us to have young pitchers, put them in different roles, maybe be protective of them a little more than that traditional starter we really saw the benefits of that.”

While Blake Snell and Tyler Glasnow are going to be traditional starters, the debate as to whether the Rays acquire that third starter and use the opener is still in debate.  Cash stated he’d personally like to find another starter to log innings and use the opener two times through the rotation rather than three times.

The Rays have been rumored to have been in contact with free agent Charlie Morton who spent the last two seasons with the Houston Astros. Last season with Houston, Morton made 30 starts logging 167 innings pitching to a 15-3 mark with a 3.13 ERA. Over the past two seasons in Houston he’s made 55 starts, logged 313.2 innings and pitched to a 29-10 mark with a 3.36 ERA. 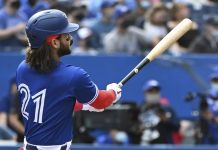