St. Petersburg, FL – The Tampa Bay Rays entered Saturday night with a magic number of two to clinch the AL East. They needed the Boston Red Sox to lose to the New York Yankees and they had to defeat the Miami Marlins.

The part the Rays couldn’t control was the Red Sox losing in New York. Boston held a 2-1 lead heading into the eighth inning but New York loaded the bases with 2-out and Giancarlo Stanton delivered a grand slam en route to a 5-3 Yankees victory  The division was in the Rays control and all they needed was to defeat the Miami Marlins, which they did 7-3.

The Yankees figure to be in a fight the remainder of the season to secure a playoff berth.

Through the first two games of a crucial series at Fenway Park, they certainly look like a team up for the challenge.

Giancarlo Stanton hit a go-ahead grand slam over the Green Monster in the eighth inning and New York beat Boston 5-3 on Saturday to tie the Red Sox for the top spot in the AL wild-card race.

Both teams are two games ahead of Toronto and three up on Seattle in the pursuit of two postseason tickets. But the Yankees now have a chance to nudge in front of their longtime rivals in Sunday night’s series finale.

Stanton connected off reliever Darwinzon Hernandez with two outs to give the Yankees a 5-2 lead. The slugger also had three hits and a three-run homer Friday night to help New York win the series opener.

“Great feeling. A lot of emotions going on. Just glad I was able to do it,” Stanton said. “Compress everything and be on time for the fastball. Something good happened.”

Given the circumstances, he said it was probably the biggest at-bat he’s ever had against Boston.

“I’d say for sure. Given what’s at stake — we all know what it is,” Stanton said. “We’re in a better situation than we were yesterday and the day before. Now it’s our job to get out of here in an even better situation.”

“Just a lot of great at-bats — winning at-bats — to set that situation up,” he said.

Luis Severino (1-0) pitched two scoreless innings for the win. Aroldis Chapman allowed Bobby Dalbec’s solo homer in the ninth and hit Kevin Plawecki with a pitch but held on for his 29th save.

New York starter Nestor Cortes’ day ended after 4 1/3 innings. The left-hander gave up two runs on four hits and struck out four. He hasn’t won since Aug. 28, a span of six starts.

Plawecki had a home run for Boston. Kyle Schwarber scored on a wild pitch and starter Nick Pivetta allowed one run over 5 1/3 innings. He allowed three hits, issued no walks and struck out seven.

The Red Sox took an early 2-0 lead before Pivetta was pulled in the sixth after he gave up a single to Gio Urshela and a double to Brett Gardner. Hansel Robles entered and threw his first pitch to Aaron Judge to the backstop, allowing Urshela to score.

Gardner tried to score on Judge’s chopper to third base, but was easily thrown out at the plate by Rafael Devers. Anthony Rizzo then lined out to end the inning.

The score was still 2-1 when Boston manager Alex Cora inserted Houck, who walked Stanton and Joey Gallo on eight pitches before settling down and getting Gleyber Torres to ground into a double play.

Houck quickly got Gary Sanchez down 0-2 and struck him out swinging to end the seventh.

Houck had a chance to set down the Yankees in order in the eighth but he issued two-out walks to Gardner and Judge.

Cora turned to Hernandez, who plunked Rizzo on the arm with a 3-1 pitch to load the bases.

“We just have two good teams,” Cora said. “They’re fighting for the same thing and they get the best out of each other.”

Yankees: INF DJ LeMahieu sat out with what Boone said is a lingering hip/groin issue. He hopes LeMahieu can return Sunday. … RHP Jonathan Loáisiga (shoulder strain) is slated to throw a bullpen Sunday and if all goes well could return for the next series against the Blue Jays.

Red Sox: X-rays were negative on Plawecki after he was hit by a pitch from Chapman in the ninth. Plawecki said afterward he was feeling fine. … Cora said he went with Hernandez in the eighth because right-hander Josh Taylor was experiencing a sore back. He will have an MRI on Sunday.

Stanton’s grand slam was the ninth of his career and second this season. It was the fourth grand slam by the Yankees this year.

Stanton has seven home runs and 18 RBIs in his last 13 games. 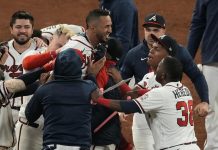 Live Coverage NLCS Game 2: Braves walk off the Dodgers to open the series with a dramatic win

Live Coverage: Dodgers vs. Giants one more time tonight – winner gets Atlanta and the Astros advance to face Boston