St. Petersburg, Fla – Manuel Margot‘s 2-run homer in the bottom of the seventh inning gave the Tampa Bay Rays all the cushion they needed in defeating the Toronto Blue Jays by a final score of 3-1 to take a 1-0 lead in their best-of-three Wild Card series.

It was a complete team effort for the win. “You feel a lot better after winning a game than losing.” Manager Kevin Cash said after the game. “We did a lot of things right tonight. We played really really nice defense. Manny comes up with the big big home run and our pitching was just tremendous. We’re thrilled to come out of game one with a win.”

Snell was happy with the vibe on the team as they played with controlled excitement leading to the team victory. “Everyone is really comfortable. That was the cool part to see.” Snell said. “There was no pressing. There was none of that. It was just very comfortable, we were playing baseball, we were very excited but it was controlled excitement. We played good defense, we got the hits that we needed, got the runs that we needed. All around it was a really good team effort. Bullpen came in solid. All around we did the right things to win the game for sure.”

Blake Snell set the tone delivering 5.2-innings of scoreless baseball allowing just one hit while walking two and striking out nine. The nine strikeouts tied the franchise postseason mark by a starting pitcher joining Charlie Morton (10/7/19 vs Astros in ALDS) and Matt Garza (10/19/08 vs Red Sox in ALCS).

Snell wasn’t happy to come out of the game but respects his manager decision. “I’m trying to go at least six [innings].” Snell said. “Five and two-thirds, I don’t know what it is about five and two-thirds lately but we’ll get past it.”

If Snell was upset at being removed from the game that doesn’t seem to move Kevin Cash’s emotional meter too much. “I’ve gotten used to trying not to value that at all.” Cash said. “I want them all to be angry. You hope none of them want to come out of the game. If he was [angry] that’s fine. I thought he had done everything in his power to give us every opportunity to win a game.”

Matt Shoemaker worked the first three innings and held the Rays scoreless allowing just two hits. He was replaced by Robbie Ray in the fourth inning and he allowed a leadoff triple to Randy Arozarena. “Give Randy a lot of credit, he doesn’t look up.” Kevin Cash said. “He had third base on his mind as soon as the ball hit the barrel.”

Ray struck out Nate Lowe for the first out but uncorked a wild pitch allowing Arozarena to score the games first run.

Joey Wendle drew a one-out walk against A.J. Cole in the bottom of the seventh. Manuel Margot followed with a 2-run homer to left to give the Rays a 3-0 lead. It was an unlikely home run for the Rays right fielder who had just one homer in the regular season spanning 159 plate appearances.

It had to be a great feeling for Margot whose father had passed away in August. “We’re all excited for Manny. A lot of people have had trying years. What he has gone through, that’s got to be pretty special for him.” Kevin Cash said. “I’m guessing that will be a hit he’ll remember for the rest of his life.”

Rays Relief Up To The Task:

Diego Castillo replaced Blake Snell and got the final out in the sixth and the first out in the seventh before hitting Vladimir Guerrero Jr. with a pitch and allowing a single to Lourdes Gurriel Jr. Nick Anderson replaced Castillo and retire Teoscar Herandez and Joe Panik to end the 7th.

Anderson remained in the game to work the eighth inning. He allowed a 1-out single to pinch-hitter Rowdy Tellez who moved to third on a double by Cavan Biggio. Tellez came into score on a sacrifice fly by Bo Bichette. The inning ending on a scalding line drive that was snared by shortstop Willy Adames. It was Adames third solid defensive play of the game.

Pete Fairbanks worked the ninth inning and allowed a 1-out double to Lourdes Gurriel Jr.but struck out Teoscar Hernandez for the second out and retired Joe Panik on a soft line drive to third baseman Joey Wendle to secure the win.

Fairbanks was one of two Rays relievers on the active roster the entire regular season not to have a save during the regular season. Combining regular season and postseason, the Rays have 13 pitchers with a save, most in major league history per Stats LLC. They passed the 2019 Rays (12), 2003 Boston Red Sox (12), and the 1973 Texas Rangers (12). 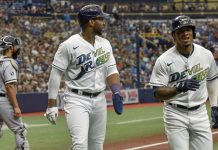 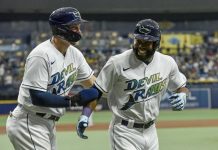