Deciding Who To Start In The ALDS, Rays Have Many Options

Tampa, FL – The Tampa Bay Rays fell to the New York Yankees 1-0 on Sunday in the Bronx. The Yankee win enabled them to avoid the uncomfortable postseason play-in Game 163 that would have been played against the Toronto Blue Jays on Monday afternoon. The loss brings a regular season to an end for the Tampa Bay Rays. A season in which they had an American League best record of 100-62.

While the regular season win-loss record as well as winning the American League East are both big accomplishments to be celebrated, for a team coming off a World Series loss to the Los Angeles Dodgers in 2020, the record and all the accolades can be appreciated later. This team has work to do for them to reach the ultimate goal of being crowned World Champions by month’s end.

There are many questions…….

The Rays have a number of choices to make as to who will be making starts, or following, during the ALDS starting Thursday night at 8:07 pm against either the Boston Red Sox or New York Yankees. Who get’s there “day” in the postseason? McClanahan most certainly does. Patino? Is he better suited in a relief role? Shane Baz? He certainly looked impressive during his short big league tenure. Did pitching in the bright lights help give the Rays confidence that turning the lights on in October will have a lesser impact on him? Michael Wacha? He was a force down the stretch. Has he found a groove? Ryan Yarbrough? Old reliable and able to bounce into just about any role? Maybe he doesn’t get his own day, but he has to be on the staff somewhere…right? Drew Rasmussen? He appears to have locked into one of the guaranteed starter spots with his performance since joining the rotation.

If I had to guess on the rotation of arms that will guarantee to get a start, I’d go with McClanahan and Wacha for Game 1 and 2 at Tropicana Field and Rasmussen as my Game 3 starter.

Manager Kevin Cash will have a lot of decisions before the Rays take the field on Thursday night against the winner of the Wild Card game Tuesday night between the New York Yankees and Boston Red Sox. 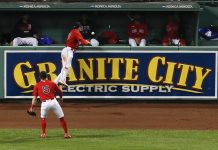 Rays and Red Sox at Fenway for ALDS Game 3 with the series tied at one game each. 4:30 pm on MLB Network