The Toronto Blue Jays beat the Tampa Bay Rays 3-1 on Tuesday night. In a pivotal battle for wild card positioning, the Blue Jays bested the Rays in a low-scoring, pitcher-dominated game.

The Blue Jays opened the game strong, with a run in the top of the first, followed up by a stellar performance from pitcher Kevin Gausman. Gausman pitched eight innings for Toronto, striking out ten Rays batters in the process. Gausman had a no-hitter going until Taylor Walls broke it up in the sixth inning.

For the Rays, Drew Rasmussen did more than enough. Rasmussen pitched six innings, only giving up one run. Despite the new additions, Tampa Bay’s offense seems to still be lackluster.

Only one player put the bat to the ball for the Rays, and that was Walls. In addition to the single he hit in the sixth, Walls smacked a solo home run in the bottom of the ninth to get the Rays on the board. Unfortunately, it was too little, too late.

The Blue Jays were another story. All but two players in their starting lineup had a hit, and it showed on the final score. Bo Bichette had an RBI single in the first inning, and Danny Jansen hit a two-RBI single in the top of the ninth inning to put the game on ice.

The Rays and Blue Jays will square off one more time in this series. The game is slated to start at 12:10 P.M. Eastern time on Wednesday. 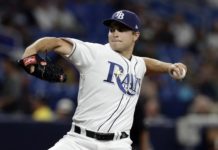 Rays trade for reliever Garrett Cleavinger from the Dodgers as they open up a big 2 game series with Toronto.