ST. PETERSBURG — Brent Honeywell Jr. took the mound Sunday afternoon for the first time in three-and-a-half years and it looked like the Rays righthander had not missed a turn in the rotation, let alone endure such a lengthy layoff.

The 26-year-old, making his major league debut, needed only 21 pitches to retire all six batters he faced in opening what turned out to be an 8-4, 10-inning loss to the Yankees at Tropicana Field.

Honeywell last took the mound in a regular season or postseason game on September 19, 2017 for Durham, the Rays’ Triple-A affiliate, in a championship game against Memphis.

Honeywell, pitching in front of his parents, threw only nine pitches in the first inning. He got leadoff batter DJ LeMahieu to fly out to right on a 2-2 pitch. Aaron Judge grounded to the left side into the shift with second baseman Mike Brosseau making the play. Honeywell then got Aaron Hicks to ground to first baseman Yandy Diaz to end the inning.

“It was a lot of fun,” said Honeywell, who was summoned from the alternate training site Saturday night to replace the injured Chris Archer and was returned following Sunday’s game. “It is something I will remember the rest of my life. It was definitely a big step.”

As he walked off the mound, the Augusta, Ga. native received well-deserved applause from the fans and then a nice reception from his teammates as he entered the dugout.

“Pretty outstanding,” said Rays manager Kevin Cash. “What a strong message he sent to us. We will get him back (to Port Charlotte) and see how he feels bouncing back and continue his progression.”

Honeywell departed with the Rays up 2-0 thanks to Mike Zunino’s two-out home run in the second with Brosseau aboard.

The lead changed hands three times thereafter, including in the decisive tenth when the Yankees scored four runs (all with two outs) off losing pitcher Collin McHugh.

Michael Wacha replaced Honeywell and proceeded to allow the first five batters he faced in the third inning to reach base, with three of them scoring. Wacha opened the inning by walking Gary Sanchez, which was a theme on an afternoon Rays pitchers issued seven walks and hit two batters, neither retribution for Austin Meadows being hit twice earlier in the game.

Wacha was fortunate to get out of the inning allowing three runs and Rays down by only one. He would find a groove and retire the last nine batters he faced in his four innings of work.

The Rays took a 4-3 lead in their half of the third on a two-run homer by Randy Arozarena. They took the lead into the eighth when the Yankees tied it thanks in large part to Ryan Thompson walking Aaron Judge to lead off the inning. That was after Thompson bailed out Cody Reed in the seventh when the latter loaded the bases with one out on a hit batter, single and walk. Thompson got DJ LeMahieu to hit into a 5-4-3 double play.

“We played a pretty good ballgame up until then,” said Cash, whose team took two of three from the Yankees on the weekend. “In the seventh and eighth innings we allowed four free passes whether it was a hit batter or three walks.”

As has been common between these two teams the past few seasons, punctuated by Aroldis Chapman throwing at Mike Brosseau’s head last season, close shaves and hit batters raised the temperature.

In the bottom of the first, Meadows was hit by a Jordan Montgomery pitch in the right shoulder. That made it each of three games in the series a Rays player was hit by a pitch. Both benches were warned. Meadows would be hit on the left wrist in the fifth by a Montgomery offering, though in the view of the umpires it did not warrant Montgomery’s ejection.

“Do I personally think the guy was trying to hit him?” asked Cash. “I did not. But this continues to rollover and it has been so grossly mishandled by Major League Baseball, last year. Major League Baseball is here to protect its players on both teams, all 30 teams. I don’t think they did that last year and we could have moved past this.”

The Rays will move past the Yankees when they host the Rangers for four games starting Monday night. 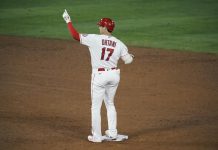 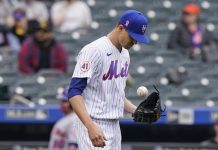 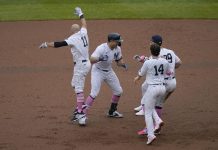 Nationals and Yankees have another epic game with New York getting their second straight walk-off win.