Chris Archer, on the disabled list since June 3, made a rehab start with the Charlotte Stone Crabs on Tuesday night. He delivered four innings of hitless baseball while striking out seven and walking one.

“Everything felt great, I don’t think ir could of gone much better,” said Archer. “Pitched with a few runner on early in the game, forced myself to work on a few things. I was able to test my health and also get a little bit better. Overall it was a great day.”

Archer is hopeful that he can make his next schedule start which would come Monday at home against the Detroit Tigers. “At this point it’s on them,” Archer said of his pending return. “If they like what they saw. I think I’m capable of helping the big league team, if they want to see a little bit more, than I’ll have to make another rehab start.”

Vidal Nuno strained his right hamstring and has been placed on the 10-day disabled list. There he joins fellow lefty Jonny Venters, who is throwing from flat ground. Venters himself is laid up due to a strained right hamstring.

Jake Faria threw a bullpen on Independence Day and is nearing a rehab stint of his own. He’s been on the disabled list since March 28 with a left oblique strain is eligible to return on July 22ns.

Christian Arroyo is running and doing light activity recovering from his oblique strain. He’s been on the disabled list since June 16th. A rehab period will be required before returning to the Rays, but there is not timetable established for that.

Wilmer Font was transferred to the 60-day disabled list with his right lat strain. The earliest he could return is August 30th.

Jose De Leon, Brent Honeywell, and Anthony Banda are all out for the year after undergoing Tommy John surgery.  Only De Leon is on the MLB disabled list at this time.

Yonny Chirinos is on the 7-day disabled list in Triple-A with some mild shoulder discomfort. He is throwing from flat ground, but a return date to action is unknown.

Jose Mujica has been out of action with a right forearm strain since early June. He is on the 7-day disabled list at Durham. 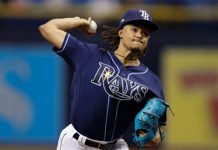