The Rays were busy at the 2019 trade deadline shoring up a roster as the team eyed a return to the postseason for the first time since 2013. They entered play on July 30th with a 61-48 mark and trailed the New York Yankees in the AL East by 7.5 games but were only one game behind the Oakland Athletics for the second wild card.

Tampa Bay finished the season 35-16 to secure the second wild card with a record of 96-66. They defeated the Oakland Athletics in the Wild Card game before falling to the Houston Astros in five games in the ALDS.

What makes a deadline deal? Are they the deals that are completed in the final 24 hours? Well, in my opinion those are included but I’d prefer to look 7-10 out from the trade deadline for a larger scope of what the front office was trying to accomplish. These trades accomplish different objectives. They could be made to fill a need on the roster short term, to provide depth for the playoff push, to clear a 40-man roster spot, or to open up playing time for someone. The 2019 trade deadline had a mix of all of these elements.

The Tampa Bay Rays and Texas Rangers had already completed an earlier deal on July 13th that deserves honorable mention here. Pete Fairbanks was sent to Tampa Bay in exchange for second baseman Nick Solak. Fairbanks ended up working in 11 games for the ’19 Rays going 2-1 with a 5.11 ERA.

The two teams hooked up on another smaller deal on July 28th when Tampa Bay sent reliever Ian Gibaut to the Rangers in exchange for a player to be named later or cash considerations. Gibaut had been designated for assignment on July 21st to make room for the return of infielder Matt Duffy from the 60-day IL.

The Rays never received a player for Gibaut who spent parts of two seasons in the Rangers bullpen appearing in 23 games and pitching to a 5.84 ERA (16ER/24.2IP). He is currently pitching for the Twins Triple-A East affiliate St. Paul Saints.

It was an unusual site as the Tampa Bay Rays and Toronto Blue Jays played each other on July 28th. Eric Sogard, then a member of the Toronto Blue Jays, was effectively traded to Tampa Bay mid-game but finished the game in Toronto’s dugout.

At the time of the trade Sogard was having a productive season batting .300/.363/.477 with 10 homers in 323 plate appearances. He battled injury with the Rays after he was acquired appearing in just 37 games but was moderately effective when healthy batting .266/.328/.404.

Curtis Taylor is currently pitching for the Blue Jays Triple-A East affiliate Buffalo after opening the season with the Jays Double-A Northeast affiliate New Hampshire. Overall, he’s pitched to a 2-2 mark with a 4.44 ERA (13ER/26.1IP)

Edisson Gonzalez has yet to pitch for any Blue Jays affiliate and is currently on their High-A affiliate Vancouver injured list.

On July 28th the Rays made one final move to open the roster spot for Eric Sogard by sending Hunter Wood and Christian Arroyo to the Cleveland Indians in exchange for minor league outfielder Ruben Cardenas and international slot money.

At the time of the deal Christian Arroyo was on the 60-day injured list with right forearm tendinitis. Arroyo was the key player the Rays received in the Evan Longoria deal with the San Francisco Giants in December of 2017. In that deal Tampa Bay received Arroyo, minor league pitchers Stephen Woods and Matt Krook, and outfielder Denard Span.

Arroyo only played one game with Cleveland before being selected off waivers by the Boston Red Sox after being designated for assignment by Cleveland. He has found moderate success in 2020-2021 with the Red Sox batting .263/.320/.459 with nine homers spanning 224 plate appearances. His biggest career impediment with Tampa Bay and now with Boston is his inability to stay healthy.

Hunter Wood appeared in 17 games with Cleveland pitching to a 3.86 ERA (7ER/16.1IP). He didn’t appear in the big leagues in 2020 and was granted free agency at the end of the season. He signed a minor league deal with the Texas Rangers in the off-season and appeared in five games for Texas in 2021 before his season ended due to an elbow injury.

Cardenas suffered a back injury in his final season at Cal State Fullerton causing him to fall to the 16th round of the 2018 draft. The back injury seemed healed as at the time of the trade Cardenas was hitting .284/.343/.475 with the Class A Lake County Captains. He finished the year with the Rays Class A affiliate Bowling Green Hot Rods and hit just .234 (26-for-111).

On July 31st the Rays traded Jake Faria to the Milwaukee Brewers in exchange for first baseman/designated hitter Jesus Aguilar. After an All-Star campaign in 2018 Aguilar was struggling at the plate in 2019 batting just .225/.320/.374 with eight homers at the time of the trade.

Faria had struggled since his successful 2017 rookie campaign where he went 5-3 with a 3.43 ERA. He struggled with Milwaukee appearing in just nine games with the big league club and allowing 11 earned runs in 8.2-innings. He did not pitch in 2020 and signed a minor league contract with the Los Angeles Angels prior to the 2021 season. He never appeared in a big league game with the Angels and was released on June 16th. He since has signed with the Arizona Diamondbacks and has pitched to a 4.19 ERA spanning 19.1-innings of work.

Anderson enjoyed an effective 2020 campaign with Tampa Bay posting a 2-1 mark with an obscene 0.55 ERA (1ER/16.1IP). He has missed all of 2021 with an elbow injury but is expected to begin a rehab assignment with the Durham Bulls with a mid-August return in site.

Trevor Richards was 3-12 with a 4.50 ERA at the time of the trade but was very effective once joining Tampa Bay. He finished the 2019 season posting a 3-0 mark with a 1.93 ERA spanning 23.1 innings of work. He appeared in just nine games for the Rays in 2020 and wasn’t effective pitching to a 5.91 ERA (21ER/32IP). He only appeared in six games for the Rays in 2021 pitching to a 4.50 ERA (6ER/12IP). He was sent to the Milwaukee Brewers along with shortstop Willy Adames in exchange for Drew Rasmussen and J.P. Feyeriesen.

Richards was effective with Milwaukee in posting a 3-0 mark with a 3.20 ERA (7ER/19.2IP) before being included in a deal to the Toronto Blue Jays along with minor league pitcher Bowden Francis in exchange for first baseman Rowdy Tellez.

Ryne Stanek was drafted as a starting pitcher in 2012 and was a starting pitcher through the 2016 season in the minors. He transition to the bullpen in 2017 with the Durham Bulls and made his big league debut in the pen with the Rays on May 14, 2017. Even if he were a reliever he would open eyes with his work as an “opener”, where he would start the game firing darts near or at triple digits.

Stanek appeared in 100 games with Tampa Bay between the 2018 season and the time of the trade to the Marlins. A total of 56 of those appearances came as a starter in the opener role. In the 56 games where he was an opener, he pitched to a 2.71 ERA and struck out 102 batters in 83 innings. In his career as a reliever, he has pitched to a 4.83 ERA striking out 156 batters in 130.1 innings.

The Dodgers sent him to the Oakland Athletics with minor league outfield Cody Thomas in exchange for minor league pitcher Gus Varland and Sheldon Neuse. He never got settled in Oakland allowing eight earned runs in nine innings before being sent to Triple-A.

He opened the 2021 campaign with the Rays High-A East affiliate Bowling Green Hot Rods where he hit .248/.361/.569 with 13 homers in 180 plate appearances. He was promoted to the Rays Double-A Affiliate Montgomery Biscuits where he has hit .263 (5-for-19) with three homers in six games.

McCarthy had risen to Triple-A in 2018 and hit an impressive .269/.377/.513 spanning 191 plate appearances with the Durham Bulls. He was injured during the 2019 campaign and was hitting just .196/.335/.385 for the Bulls at the time of the trade. McCarthy did appear in four games with the Giants in 2020 and is currently playing for their Triple-A West Sacramento club.

In exchange for McCarthy, the Rays received right handed pitcher Jacob Lopez. Lopez was pitching the Giants Low-A affiliate in the Northwest League and had posted a 2-3 mark with a 3.02 ERA at the time of the trade.

He finished the 2019 season with the Rays Low A affiliate Hudson Valley Renegades in the New York Penn League. There he went 2-0 with a 2.40 ERA. 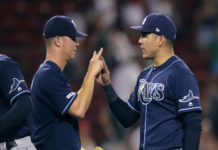 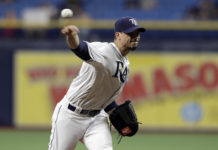 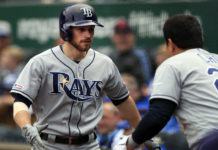 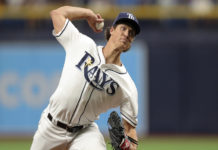 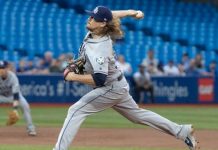