Justin Verlander was dominant, Blake Snell not so much as the Houston Astros defeated the Tampa Bay Rays 5-1 on Opening Day at Tropicana Field.

It started off well for Tampa Bay.  Blake Snell retired the Astros in order in the top of the first and Austin Meadows opened the bottom of the frame with a homer.  He becomes just the second member of the Rays to open the season with a homer since Gerald Williams did it in 2000 in Minnesota against the Twins Brad Radke.

George Springer made Blake Snell pay for walking the seven and nine hitters in the third inning by blasting a first pitch 3-run homer to dead center to give Houston a 3-1 lead.

Michael Brantley hit a solo homer in the fourth inning to push the lead to 4-1.

Jose Altuve connected for a solo homer with two-out in the fifth inning to extend the Astros lead to 5-1.

Blake Snell (0-1, 7.50 ERA) takes the loss for Tampa Bay who fall to 0-1 on the season. He worked six innings allowing five earned runs on six hits (including three homers) while striking out three and walking two. It was only his second time allowing three homers in a game. He also served up three homers on May 13, 2018 against the Orioles.  The five runs allowed matched his season high from last season.

Justin Verlander (1-0, 1.29 ERA) picks up the win for the Astros delivering seven strong innings allowing just one run on three hits while striking out nine and walking one.

In the second inning he issued a leadoff walk to Yandy Diaz and followed that by hitting Joey Wendle with a pitch.  After that he retired the next 14 straight batters he faced. The streak was ended by an error on a Ji-Man Choi ground ball.

Kevin Cash turned to Jalen Beeks to open the seventh inning. He responded by striking out the side allowing one base hit. He worked the final three innings for the Rays holding the Astros scoreless .

Austin Meadows became just the second member of the Rays to open the season with a homer joining Gerald Williams who did it in 2000 in Minnesota against the Twins’ Brad Radke.

Mike Zunino threw out both runners who attempted to steal against him. He nabbed Yuli Gurriel in the second and Michael Brantley in the sixth.

Joey Wendle reached base twice via the hit-by-pitch. It marks the first time in his career that he’s been hit twice in the same game.

Jalen Beeks, making his first opening day roster, worked the final three innings. The multi-inning stint is nothing new for Beeks. Last season he went at least two innings in all 12 of his appearances and at least four innings in five.

Tampa Bay and Houston continue their series on Friday night with Charlie Morton facing his old team. Last season with the Astros Morton went 15-3 with a 3.13 ERA.  Houston counters with Gerrit Cole who went 15-5 with a 2.88 ERA in 2018. 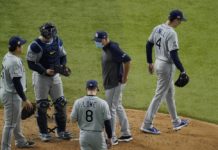