Northern Trust returns to Ridgewood after three years away

Paramus, NJ- The Northern Trust began its existence in 1967 as the Westchester Classic, played at the Westchester Country Club in Harrison, New York. Since then, the tournament has changed names and states, but has maintained a tradition of attracting great names from across the golf world. Jack Niklaus, Sergio Garcia, Vijay Singh, and reigning champion Dustin Johnson have all won this tournament twice.

For the first time since 2014, and the fourth time in tournament history, The Northern Trust sets up at the Ridgewood Country Club in Paramus, New Jersey. A.W. Tillinghast and Clifford Wendehack combined to design the clubhouse and golf course in 1929. Legendary golfer Byron Nelson was the club professional during the Great Depression and made major improvements to his game here.  Events like the Ryder Cup, US Amateur, and US Senior Open have been played here through the years. Since the then titled Barclays tournament left the Westchester Country Club, Ridgewood has hosted the tournament three times. This year will be the first time hosting the tournament under the Northern Trust banner.

Ridgewood boasts 27 beautiful golf holes for a potentially diverse course set up in tournament situations. The club divides the course into three groups of nine holes each. For tournament play, the course samples all three sections. The first seven holes are from the East Course, the middle five come from the Central Course, and the final six are from the West Course that ends at the iconic club house.

Ridgewood’s most memorable holes are the short par four 12th hole, the well protected par three 15th, and the long par five 17th. 12 is a 291 yard, drivable par four, similar to TPC Cromwell’s 15th hole, where the Traveler’s is played. The trick is to either drive the green or miss short and right of the green, depending on where the pin is located. A long miss is begging for trouble, as the green is a plateau surrounded by five bunkers. 15 is only 155 yards. It’s slightly uphill from the tee and surrounded by four bunkers. The green is large, but there’s little way to recover from missing it. 17 is a mammoth hole; 594 yards from tee to green. It’s one of the famed par fives on tour. It winds to the left through tall trees and features a narrow fairway.

The consensus is that driving is critical. The roughs are thick, as Brooks Koepka noted. “If you lay up with a 3-iron or 3-wood and you miss the fairway you’ll be struggling because you can’t hit 6/7-iron out of this stuff.” Accurate drivers will succeed here. 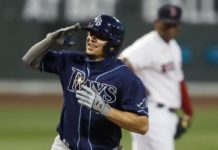