Seth Waugh knows how a Ryder Cup is supposed to look and how it should sound.

In his first week as CEO at the PGA of America, Waugh was in the 72-foot high grandstand behind the first tee at Le Golf National outside Paris. Flags were waving. Fans were singing. Players were trying to conceal their nerves. That’s what he expects for the Ryder Cup at Whistling Straits in Wisconsin.

The inevitable became reality Wednesday when Ryder Cup officials postponed the September matches until next year due to the COVID-19 pandemic that made it increasingly unlikely the loudest event in golf could have spectators.

“A Ryder Cup with no fans is not a Ryder Cup,” Waugh said.

The Ryder Cup was scheduled for Sept. 25-27 at Whistling Straits along the Lake Michigan shore. Because of a reconfigured schedule created by golf being shut down for three months, the matches would have been held one week after the U.S. Open.

Now, the Ryder Cup will move to Sept. 24-26, 2021, the second time in the last two decades it was postponed. The Sept. 11 terrorist attacks led the 2001 matches to be postponed two weeks before they were set to be played.

Waugh, the former CEO of Deutsche Bank Americas, called it “the most complicated deal of my career” because of so many moving parts.

The decision mean Europe’s next home Ryder Cup set for Italy has been pushed back until 2023. The European Tour thrives on Ryder Cup revenue.

And it affects the PGA Tour, which already has lost millions this year while trying to keep canceled tournaments solvent. The Presidents Cup in 2021 at Quail Hollow in North Carolina was a sellout in corporate hospitality, and it now gets pushed back a year.

Quail Hollow instead will host the Wells Fargo Championship next spring, and that event will move to the TPC Potomac in 2022 during the Presidents Cup year.

“It was very clear that once we reset the schedule, there were challenges,” PGA Tour Commissioner Jay Monahan said. “They did absolutely everything they could to play the Ryder Cup and play it with fans. When it was clear that was something they were unable to do, we came to the table and were about to reach the right outcome for players and fans.”

Among the issues caused by the pandemic was travel by European fans, who would have had to spend a month in quarantine — two weeks both coming and going — for three days of matches. The environment at the Ryder Cup is unlike any other in golf, with distinctive tones of cheering from Europeans and Americans, hour-by-hour tension over 28 matches from the opening tee shot Friday morning until the final putt Sunday afternoon.

“The Ryder Cup is uniquely about the fans,” Waugh said. “We didn’t want to build Lambeau Field, get hopes up and then have to cancel.”

There is no guarantee moving it back a year will change anything. The PGA Tour resumed its schedule a month ago and has not allowed spectators for at least seven events. The PGA Championship on Aug. 6-9 in San Francisco will be the first major without fans.

Waugh raised the notion of canceling the Ryder Cup if the coronavirus situation hasn’t changed by next September, though he was “betting on science.”

The Americans, who won the last Ryder Cup on home soil in 2016, changed their qualifying because of the three-month shutdown that allowed Steve Stricker six captain’s picks. With the postponement, the U.S. and European teams are reviewing their criteria. Europe said its Ryder Cup points earned since last September have been frozen until next year.

Players had urged all along for the Ryder Cup to be postponed if fans couldn’t be there.

“The decision to reschedule is the right thing to do under the circumstances,” Stricker said. “At the end of the day, we want to stage a Ryder Cup that will rival all over Ryder Cups in my home state of Wisconsin, and now we have the opportunity to showcase the event as it was meant to be seen.”

The move does nothing to ease a crowded golf schedule for 2021. The Summer Olympics already were postponed with hopes Tokyo can host them next summer. Golf also has three other cups on the calendar — the Walker Cup and Curtis Cup for amateurs, and the Solheim Cup on the LPGA Tour, which is scheduled to finish on Labor Day next summer at Inverness Club in Toledo, Ohio.

When the Ryder Cup was postponed because of 9/11, that led to the Solheim Cup in Minnesota and the Ryder Cup in England played in consecutive weeks in 2002. The Solheim Cup then moved to odd-numbered years. That wouldn’t appear to be the case this time.

LPGA Commissioner Mike Whan said in May that he wouldn’t be bothered by the Ryder Cup going to 2021 as long as it didn’t affect the Solheim dates.

“I think at this point, Solheim is strong enough to survive, whether it’s a week or two before or after the Ryder Cup,” Whan said at the time. “Even if we never sold another dollar or got one more thing right for that course, it’s going to be a home run. I wouldn’t do that to them and all the other ones that follow.” 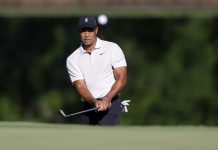 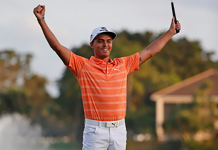 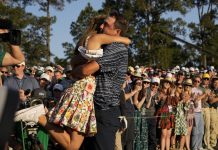