San Diego is not on a National Basketball Association or National Hockey League list of potential expansion or relocation cities. San Diego failed twice to hold onto NBA teams losing the Rockets to Houston in 1971 only four years after getting an expansion team and when Donald Sterling decided to move his Clippers without the approval of NBA owners to Los Angeles in 1984 after six seasons in the city following a franchise shift from Buffalo to the Southern California city. An American Basketball Association team lasted 3 years and 11 games folding on November 12, 1975. The Rockets, the ABA teams and Clippers all played at the San Diego Arena. That arena is 52 years old and may not make it until 55. The arena could be shut down in May 2020 by the city for a major redevelopment of the area.

The arena operator is hoping they can get a new deal with San Diego to remain open. Presently the American Hockey League’s San Diego Gulls, an affiliate of the NHL’s Anaheim Ducks play in the building. Professional lacrosse will be housed in the building with the San Diego Seals of the National Lacrosse League. There are about 40 concerts a year in the place.  The arena had one NBA pre-season game in September. There is also a Major Arena Soccer League squad that uses the venue. Could San Diego replace the old arena in the near future? Sure, but there is no plan at this point to build a new downtown arena. There have been periodic whispers that San Diego could build a new building but it is unlikely that the city will spend hundreds of millions of dollars for a building. The city would not spend money to build an NFL facility. The Spanos family moved its Chargers franchise to Los Angeles after the 2016 season. San Diego indoor sports is in limbo. 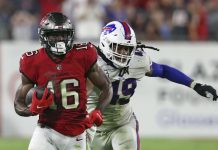