“Just because you spent a lot of money doesn’t mean you’re going to win. We’ve seen that in our own organization our last couple of years,” Ricketts said Monday. “The fact is, it’s not about how much you spend, it’s about where you spend it and getting the right guys on board.”

Star third baseman Kris Bryant said last weekend the Cubs have the financial ability to keep their All-Star core together “if they want to.”

“Where we place our resources is a baseball decision,” Ricketts said, referring to president of baseball operations Theo Epstein and general manager Jed Hoyer

“Those aren’t defining the decisions in the front office, but they are always a consideration in the front office,” Ricketts said, adding later, “We had the highest baseball budget in the (National) League last year. So we’re putting resources to work. If we find a place that we can put dollars to work that we think will help us get to the World Series, we do it. It’s just not infinite resources, we have to manage it, and that’s the real challenge.”

Ricketts said that some of the flexibility that Epstein and the front office may have had coming into 2020 was used last season to added closer Craig Kimbrel for $43 million over three seasons.

“I trust our baseball guys to put those resources to work in the right way, and also keep a long-term perspective,” Ricketts said, adding he believes the Cubs and new manager David Ross have the best team in the NL Central.

“We really have a dynamic, exciting new manager,” he said. “I think the players are going to play very very hard for David Ross. Baring some kind of crazy injuries, we should win our division and get back in the playoffs. And once you’re in the playoffs, there’s no reason to think you won’t go all the way,”

Ricketts said Bryant’s grievance over service time was “not personal.” An arbitrator ruled against Bryant, who remains on track to become eligible for free agency after the 2021, not after this season as he had wanted.

“The league, obviously, and the owners, felt our interpretation was correct,” Ricketts said. “We love Kris, hopefully he stays healthy and has a great year. … A full season of a health Kris Bryant is something we could really use.”

“I just watched Rossi give his first big team speech and I mean the energy, the passion, and his ability to communicate … he’s a proven winner. I think he’s the right guy for us,” Ricketts said.

Ross added that he just wanted to make sure the players knew who he was.

“I didn’t say anything earth shattering, or mind blowing. It’s baseball. I just wanted to let them know what I believe in and what I’m about, and who I am,” Ross said. “I got to say my piece, and I don’t know if it went over well or not. I was out there being me. I’ll be best if I can continue to do that.”

Notes: 2B Jason Kipnis was in uniform after finalizing a minor league contract. Kipnis, who turns 33 in April, was born and raised in the Chicago suburb of Northbrook. He spent his first nine seasons with Cleveland, batting .245 with 17 homers and 65 RBIs in 121 games last year. 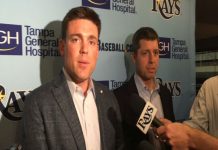 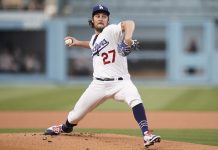 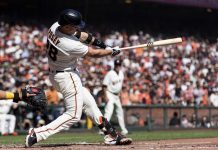