New York Yankees manager Aaron Boone took a leave of absence from the team to get a pacemaker and intends to return to work in a few days.

The Yankees said the procedure was performed Wednesday at St. Joseph’s Hospital in Tampa, Florida, and went as expected. Boone remained hospitalized overnight.

“It sounds like it’s going to be a short-term thing,” general manager Brian Cashman said. “I do applaud him for being very open and honest.”

Boone, 47, said in a statement the medical team is “confident that today’s surgery will allow me to resume all of my usual professional and personal activities and afford me a positive long-term health prognosis without having to change anything about my way of life. I look forward to getting back to work in the next several days.

Washington Nationals left-hander Jon Lester is leaving spring training camp to have surgery for the removal of his thyroid gland.

The 37-year-old Lester was to travel from West Palm Beach, Florida, to New York on Wednesday; the Nationals said the operation is planned for Friday.

“Hopefully he can pitch again in about a week,” Nationals manager Dave Martinez said. “We want him to get it taken care of now, so it’s not an issue.”

In 2006, Lester’s rookie season with the Boston Red Sox ended early because he was diagnosed with a form of lymphoma. He underwent chemotherapy treatments and returned to the Red Sox at spring training before the following season.

Lester is entering his 16th year in the majors and first with Washington. He was a free agent and joined the Nationals on a $5 million, one-year contract after playing the past six seasons with the Chicago Cubs.

Houston Astros left-hander Framber Valdéz has a fractured left ring finger, an injury that could deal another blow to the team’s banged-up starting rotation.

The 27-year-old was hurt on the fifth pitch of his spring training debut Tuesday at Port St. Lucie, on a one-hopper off the bat of the New York Mets’ Francisco Lindor for the second out of the first inning. The ball hit the finger as he grabbed the ball, and after throwing to first for the out, Valdéz flexed the finger several times.

He took a few warmups and stayed in the game. Valdéz finished two innings, throwing 24 pitches.

“Following his outing, we decided to have Framber examined,” Astros general manager James Click said Wednesday. “The X-ray revealed the injury. At this point, the medical staff needs to do additional tests and imaging before deciding on the next steps. We will know more in the upcoming days.”

Houston already was without ace Justin Verlander, who probably will miss the entire season following Tommy John surgery on Sept. 30. Valdéz had been projected to be part of a rotation that includes Zack Greinke, Cristian Javier, Lance McCullers Jr. and José Urquidy.

“It’s nice to get out of there and face another team,” Kluber said. “Obviously the bonus that it went well, as well.”

While with Cleveland, Kluber broke his right forearm on May 1, 2019, when hit by a comebacker off the bat of Miami’s Brian Anderson. He returned for his Texas debut last July 26 but tore a muscle in his right shoulder, ending his season after one inning.

Two sluggers the Nationals are hoping will find their form at the plate after some struggles with their former teams — Kyle Schwarber and Josh Bell — both hit solo shots in Washington’s 8-5 loss to the Marlins.

Washington signed Schwarber as a free agent from the Cubs and picked up Bell in a trade with the Pirates.

“If we get some guys up in front of them, which I’m pretty confident we will, that’s encouraging for us,” Nationals manager Dave Martinez said. “Those two guys are going to hit in the middle of our lineup.”

Someone expected to bat in front of them, 2020 NL batting champ Juan Soto, made his exhibition debut Wednesday. He played four innings at his new position, right field, and went 0 for 2 in the No. 2 spot in the order, between Victor Robles and Trea Turner. Soto’s spring training start was delayed because he fouled a ball off his right foot in live batting practice Sunday.

Washington’s Robles and Jake Noll both got hit by pitches during the game.

In a rare nine-inning game this spring, Eliezer Hernandez allowed one run and two hits in two innings. Adm Duvall hit his first home run, a three-run drive in the first off Erick Fedde,

Bobby Dalbec hit his second and third homers, driving in three runs. J.D. Martinez had two hits for a second straight game, driving in his first two runs of spring training. Hunter Renfroe had a three-run double in an eight-run fourth inning.

San Diego didn’t get its first hit until Jake Cronenworth and Jorge Mateo hit back-to-back doubles with one out in the bottom of the sixth inning. Newcomer Blake Snell threw a scoreless inning in his first start. Pablo Reyes hit a three-run homer for Milwaukee. Josh VanMeter had a two-run single and stole two bases.

Edward Olivares had a two-run double for Kansas City. Reliever Wade Davis pitched a scoreless inning despite allowing a hit and two walks. Eloy Jimenez had an RBI single to spark a three-run first inning, Zack Collins hit his first homer and Luis Robert went 2 for 3 with a double.

Colorado leadoff man Raimel Tapia hit a two-run homer, Josh Fuentes had an RBI double and Charlie Blackmon went 0 for 2 in his first action. Matt Olson had a two-run double in a three-run first,. and Pete Kozma’s RBI double sparked a four-run second.

Dodgers starter Julio Urías had a rocky inning, allowing an RBI double to Alex Blandino. New reliever Corey Knebel gave up three hits and a run in one inning for the World Series champions. Chris Taylor, Max Muncy, Justin Turner and Will Smith all went 0 for 2.

Tejay Antone was impressive for Cincinnati with five strikeouts in two scoreless innings. Deivy Grullón tied it with a two-run homer in the seventh. 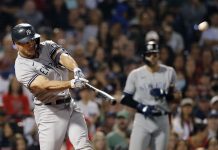 Rays clinch the AL East title. Meanwhile, the Yankees, Red Sox, and Jays are still in the WC race with a week to go