Starting today all over Florida there are going to the sounds of bats striking balls, crowds cheering for their favorite players and kids getting autographs. Time for Grapefruit League Baseball and the Rays open in Ft. Myers, against the Red Sox, while here in the area it will be the Yankees, favorites to win the American League Championship taking on the Toronto Blue Jays in Tampa.

The Braves host the Orioles in a game between the two teams that call Sarasota County home. The Twins travel to Bradenton to face the Pirates while the Phillies are in Lakeland to visit the Tigers.

The game of the day will be played at The Ball Park of the Palm Beaches as the World Champion Washington Nationals play host to the Houston Astros in a rematch of the title series. Much has happened since the two teams that share the same Spring Training stadium played an epic seven games back in October.

The Astros were fined for cheating and thus far since the team came to camp players from all over baseball have voiced their disgust over what Houston did.

Florida is not the only place where games are taking place as the Catus League also begins today out in Arizona. Where the Angels host the White Sox in a game between two teams that had very busy off-seasons. 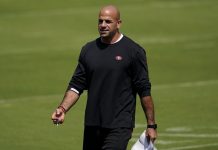