The Rays used Javy Guerra (1-inning), Brooks Raley (0.1-innning), and Colin Poche (1-inning) to bridge the gap between Springs and Fairbanks. The offense featured back-to-back homers by Christian Bethancourt and Jose Siri as well as key RBI hits from Jonathan Aranda and Manuel Margot. Taylor Walls worked a bases loaded walk to cap the scoring for the Rays. Tampa Bay moved with 1/2-game of the Wild Card Leading Toronto Blue Jays who lost to the Baltimore Orioles.

Tampa Bay fell behind 1-0 after Josh Jung hit a solo homer in the top of the second inning. The lead was quickly erased in the home half of the inning as Christian Bethancourt and Jose Siri delivered back-to-back homers putting the Rays in front 2-1. It was Bethancourt’s 11th homer (seventh with Tampa Bay) and Siri’s sixth (third with Tampa Bay) and it was the fifth time this season Tampa Bay delivered back-to-back homers. The last time came back on September 6th against the Red Sox when Bethancourt and Yu Chang delivered.

Yandy Diaz led off the third inning with a single and scored from first on a RBI double by Jonathan Aranda to give Tampa Bay the 3-1 lead. Manuel Margot delivered an RBI single to put the Rays on top 4-1.

Rangers Cut Lead To One:

Corey Seager led off the top of the ixth inning belting his 31st homer of the season. Adolis Garcia singled and was on first with two-out when it appeared he had been picked off. Harold Ramirez overthrew Jonathan Aranda and Garcia advanced to third. The miscue cost the Rays as Josh Jung singled to score Garcia and cut the Rays lead to 4-3. Jung moved into scoring position when Springs hit Josh Smith with a pitch. Springs was lifted with 2-on and 2-out for Javy Guerra who struck out Sam Huff to end the Rangers rally.

Christiaan Bethancourt singled with 2-out in the seventh inning, Jose Siri walked, and Wander Franco pinch hitting for Ji-Man Choi dribbled an infield single to load the bass. Taylor Walls walked to force home Bethancourt and extend the Tampa Bay Lead to 5-3.

Jeffrey Springs extended his streak of consecutive scoreless innings 17 innings before allowing a solo homer to Josh Jung in the second inning. Springs allowed another homer to Corey Seager in the sixth. Overall, Springs worked 5.2-innings allowing three runs (two earned) on six hits (including two homers) while striking out six and walking none. He threw 93 pitches with 62 for strikes.

Glenn Otto worked 3.1-innings allowing four earned runs on seven hits (two homers) while striking out three and walking none. He threw 57 pitches with 36 for strikes.

Tampa Bay will continue their 10-game homestand by welcoming in the Houston Astros for a three game series starting Monday night at 6:40 p.m. Drew Rasmussen (10-5, 2.77 ERA) will take the mound for the Rays. The Astros will counter with right hander Luis Garcia (12-8, 4.04 ERA). 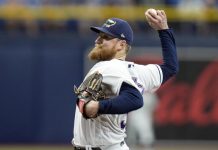