INDIANAPOLIS, Ind.(AP) –Sebastien Bourdais, was born in France but he proudly calls St. Petersburg home. In March, Bourdais opened the 2017 IndyCar season with a win in the Firestone St. Petersburg Grand Prix, in his adopted hometown.

But yesterday, the Dale Coyne Racing’s driver  hit the wall hard in turn 2 during qualifying at Indianapolis Motor Speedway on Saturday afternoon.

The driver of the No. 18 Honda suffered multiple fractures to his pelvis and a fracture to his right hip.  He will undergo surgery at IU Health Methodist Hospital.

Series officials say he was alert and never lost consciousness after the wreck.  He was transported downtown by ambulance.

“Sebastien is in good hands here at IU Methodist Hospital with the staff,” said car owner Dale Coyne.  “Now we just wait for him to recover.”

Safety team members spent about 10 minutes getting Bourdais out of the car before putting him on a backboard. Track officials said he was awake and alert when he was transported by ambulance to the hospital. They said he never lost consciousness.

Bourdais had just completed two laps over 231 mph — the fastest laps of the day — when the car started to spin.

He won the season-opening race at St. Petersburg, Florida, and had the fastest time in Friday’s practice.

Coyne will likely have to find a replacement driver for the May 28 race but may not have to make the decision before the second round of qualifying is held.

Because only 33 cars are entered for the 500, any that do not qualify will be sent to the back of the field and will be arranged based on entrant’s points.

One other driver, Zach Veach, also did not qualify Saturday. Veach crashed in practice earlier this week. It is likely the team will settle on a replacement driver later this week. 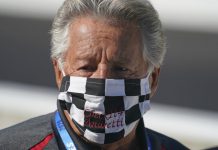 Fishers, Indiana Wants To Use An Arena For Economic Development