The Lightning are trying to become the first team to capture three consecutive Stanley Cup titles since the New York Islanders won four in a row from 1980-83. But tonight, in Toronto they need to beat the Maple Leafs or their 2021-2022 season will end with a Game 7 loss in round one of the Stanley Cup Playoffs.

Getting to a Game 7 did not come easy as it took some late third period scoring to tie the game then won it in overtime. Ondrej Palat, Anthony Cirelli and Nikita Kucherov also scored for the Lightning, who blew a two-goal lead for the second straight game and trailed 3-2 entering the third period.

Brayden Point scored the winning goal on a rebound with 1:56 remaining in the first extra period, touching off a raucous celebration in the stands at sold-out Amalie Arena and handing Toronto another crushing postseason blow.

“All we did was buy another chance to keep our season going,” Point said.

“It all comes down to one game. … Those are fun ones to play in,” Cirelli added.

The Maple Leafs, who’ve been eliminated in the first round each of the past five seasons, are 0-for-their-last-8 in close-out games as they chase their first postseason series win since 2004.

“We had our looks in OT. Unfortunately we weren’t the ones to cash in on our opportunities,” Toronto’s John Tavares said.

“We worked hard all year to earn home ice, and we’ve got a great opportunity going home in front of our fans to try to close this thing out,” Tavares added. “Look forward to the opportunity. It’s what the game’s all about.”

The Lightning, meanwhile, faced elimination in a series for just the second time over the past three postseasons. The Islanders extended them to Game 7 in last year’s conference semifinals, with Tampa Bay’s winning 1-0 before going on to defeat the Montreal Canadiens in the Stanley Cup Final. 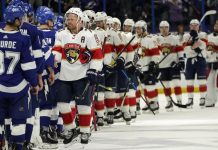 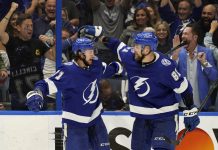