Former Tampa Bay Buccaneers and Denver Broncos safety John Lynch was elected to the Pro Football Hall of Fame Class of 2021, it was announced Saturday in Tampa.

Lynch, who currently serves as the general manager of the San Francisco 49ers, will be inducted into the Pro Football Hall of Fame later this summer in a ceremony in Canton, Ohio. He joins defensive end Lee Roy Selmon (1976-84) defensive tackle Warren Sapp (1995-2003), linebacker Derrick Brooks (1995-2008) and head coach Tony Dungy (1996-2001) as former Buccaneers who have been enshrined.

Buccaneers Co-Chairman Bryan Glazer stated: ““John was on of the greatest Buccaneers of all time and our family is so proud of his induction into the Pro Football Hall of Fame. He is a class act on and off the field and is truly deserving of this honor. It is only fitting that he will be acknowledged in front of fans for the first time as a member of the Hall of Fame Class of 2021 on the same field where he developed into an NFL legend.”

With nine Pro Bowl selections, Lynch ranks second all-time among safeties, behind only fellow Hall of Famer Ken Houston, who earned 10 trips. Lynch was also named to four All-Pro teams, earning first-team honors in 1999 and 2000 and second-team honors in 2001 and 2002. In 2000, he was named NFL Defensive Back of the Year by the NFL Alumni.

A captain on the Buccaneers’ 2002 Super Bowl championship team, Lynch ranks fifth in games played (164), sixth in games started (132), sixth in tackles (973) and sixth in interceptions (23) in team history.

In 2006, Lynch won the Bart Starr Award, which is voted upon by players throughout the NFL for recognizing a player who shows outstanding character and leadership in the home, on the field and in the community. He was also presented with The Byron “Whizzer” White Award, which is given annually to the NFL player who serves his team, community and country in the spirit of Byron Raymond White.

Though others have eclipsed him in some sections of the record book, Peyton Manning’s stamp on the NFL is very much a thing of 2021 and beyond.

Manning, the quarterback whose meticulous attention to detail helped turn the 21st-century gridiron into a chessboard on turf, was awarded his spot in the Pro Football Hall of Fame on Saturday in his first year of eligibility.

The son of Saints legend Archie and brother of two-time Super Bowl champion Eli will be joined later this year in Canton by another first-ballot lock, defensive back Charles Woodson, who beat out Manning for the Heisman Trophy in 1997, and then spent nearly two decades trying to stop him. Calvin Johnson — aka “Megatron” — was also a first-ballot selection, his mere nine years of playmaking excellence with the Lions more than enough to convince the panel.

This story was provided by the Tampa Bay Bucs fine PR department. 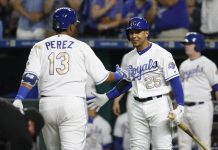 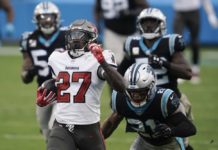