For the third time this season, the Buccaneers were able to pull off a win after trailing at halftime.  Head Coach Bruce Arians addressed the players after the game saying, “if we can play 30 minutes like that, why they hell can’t we play 60. And it’s frustrating.”

The Buccaneers look like two different teams on the field before and after halftime.

On the one hand, the offense completed over 380 yards for four touchdowns and a field goal in the second half.  Quarterback Tom Brady led the team to victory with a score on almost every possession, including a 46-yard touchdown to wide receiver Antonio Brown to finally give the Bucs the lead in the fourth quarter.

On the other hand, the offense was completely shut out in the first half and Brady was sacked several times. As tight end Cameron Brate explained, “really nothing was going right for us” and “that was about as bad as we could have played in the first half.”

The defense had their own struggles, as well.  They eventually were able to slow down Atlanta and linebacker Devin White sacked Matt Ryan three times in the fourth quarter, but the team had already given up 261 yards and 17 points in the first half.  Arians said, “overall, the fourth quarter is when we really played well defensively.”

Brady added, [Devin White] did a great job. They really put a lot of pressure on Atlanta in the second half and made a lot of big plays, backed them up, got us great field position, and it was a great team effort there in the second half.”  However, he too recognizes that “we’re going to have to do it for 60 minutes and it’s going to be a big point of emphasis for us.”

The magic will come when the team finally plays to their full potential at the start of the game and holds onto it for all four quarters.  The players had different perspectives on what it takes to win a ball game.  One said heart while others said coming out with more energy in the first half.

Whether it is heart, energy or just sheer will, the Tampa Bay Buccaneers only have two games left to put it all together before their highly anticipated playoff run with Tom Brady.

As Brate said, “I don’t think we will win too many playoff games behind a team by 17 points. It’s going to be something we have to figure out. With the guys in the locker room we never think we are out of it.”  White believes, “if we can play how we played in the second half in the first half, nobody can stop us.”

Tampa Bay plays the Detroit Lions on Saturday, December 26 at 1:00 pm, and will get one more shot at Atlanta at home on January 3.

The videos in this story were provided by the Tampa Bay Buccaneers Youtube Channel. 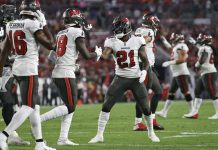 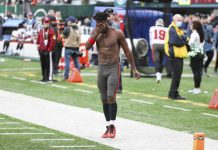 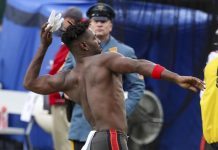 The Buccaneers make sure that everyone knows that Antonio Brown was not hurt on game day. They cut him officially today.