The Buccaneers displayed near perfect precision moving the ball offensively in the first quarter.  Between Quarterback Tom Brady’s passing game from inside the pocket to running back Leonard Fournette’s positive yardage, the Bucs landed two back-to-back scoring drives.

On the first, Brady mixed in handoffs to Fournette with deep passes to Mike Evans, Chris Godwin and Antonio Brown. The drive culminated in a 2-yard touchdown pass to tight end O.J. Howard.

On the second, the Bucs utilized running backs Fournette and Ronald Jones on 7 of the 9 plays. However, it was receiver Antonio Brown who dove into the end zone on a 23-yard pass for the touchdown. The Bucs lined up on the Eagles 23-yard line.  Brady came under pressure from the left and rolled right.  Brown took advantage of an open secondary sitting wide open in front of the goal line.

Arians explained that Brown was probably the third read on that play, “that’s what [Antonio Brown] does, he’ll run and get to an open spot when he sees the quarterback moving.” Brady added, “[Antonio Brown] made a great play. Just dipped underneath the guy and found space. Kinda what he’s done his entire career. He made a huge play. it was awesome.”

Despite this early setback, the Bucs defense shut out the Eagles the rest of the first half. They lost cornerback Richard Sherman to a hamstring injury. However, the rest of the team stepped up, including extra pressure by the linebackers, sacks by Vita Vea and Jason Pierre-Paul, and and an interception by Jamel Dean.

Following the interception,  Brady came under pressure from the Eagles for the first time in the game.  Despite the disruptions, the Bucs drove the field and punched it in on Fournette’s 2-yard touchdown run.  At the half, the Bucs were leading 21-7 and were outplaying the Eagles with 233 yards total offense to 73.

Unfortunately, the penalties would come back to haunt the Bucs. At the end of the third quarter, safety Mike Edwards received a pass interference call on a match up with receiver Jalen Reagor.  The 50-yard penalty was costly and gave the Eagles field position on the Tampa Bay 25-yard line. The defense made the Eagles earn every yard into the red zone, but eventually Hurts ran in a 6-yard touchdown.

Making things a bit more interesting in the fourth quarter, the Buccaneers made a questionable play call to go for it on a 4th and 3.  Tampa Bay was leading 28-14 with over 9 minutes left on the clock.  Brady had completed a few short passes to Mike Evans and Cameron Brate, but due to an earlier offensive holding penalty they were facing 3rd and 11.

Brady completed another short pass to O.J. Howard leaving them 4th and 3 on the Eagles 46-yard line. The Bucs decided to go for it. It did not pay off.  The deep pass to O.J. Howard was incomplete and the ball turned over on downs.  Arians said after the game they were trying to run out the clock, ”trying to ice it, and trust our offense to get it done and they didn’t get it done. You win some, you lose some.”

Philadelphia took advantage of the field position and Hurts eventually ran in a 2-yard touchdown.  The Eagles went for a 2-point conversion and succeeded with a pass to Watkins making the score 28-22.  The game ended after the Bucs used up the remaining clock and Brady kneeled at the 8-yard line.

In the end, the few moments of success for the Eagles was not enough to overcome the Tampa Bay Buccaneers.  And although this was certainly a team win, Leonard Fournette should be recognized for a top performance. He had 123 yards total offense, including 79 rushing and two touchdowns.  Fournette’s 44 passing yards was the second highest behind only Antonio Brown.

Arians said, “Lenny’s been really, really good.  Real solid run and pass, and pass protection. He’s playing as a really good 3-down back right now at a high level.” Brady added, “he’s a great back. He’s big, tough, catches it, runs, blocks, does everything for us. Great to have him in there. Obviously when he’s rolling, it’s tough to stop us.”

After two games this week, the Buccaneers will get some extra rest before taking on the Chicago Bears on October 24.  Arians said, “we really need this rest. Hopefully we’ll see who we can get back, if anybody, but the ones who have been playing they definitely need the time off.”

The videos used in this story were provided by the Tampa Bay Buccaneers Youtube Channel. 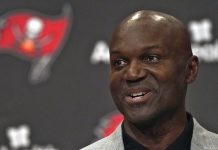