St. Petersburg, FL – The Tampa Bay Rays entered Saturday night with a magic number of two to clinch the AL East. They needed the Boston Red Sox to lose to the New York Yankees and they had to defeat the Miami Marlins.

The part the Rays couldn’t control was the Red Sox losing in New York. Boston held a 2-1 lead heading into the eighth inning but New York loaded the bases with 2-out and Giancarlo Stanton delivered a grand slam en route to a 5-3 Yankees victory  The division was in the Rays control and all they needed was to defeat the Miami Marlins, which they did 7-3.

Shane McClanahan (10-6, 3.44) picked up his 10th win of the season but didn’t have his sharpest arsenal on Saturday night. Despite lacking the dominant stuff, he was able to limit the damage allowing just one run in five innings on six hits while striking out three and walking one. It was the 11th straight start in which he’s worked five or more innings. In that stretch, he’s allowed more than 3 earned runs in only one start (September 2nd vs Boston Red Sox).

Miguel Rojas homered off McClanahan in the third inning giving the Marlins the early 1-0 lead. The Rays answered in the fourth inning on a Joey Wendle double and took the lead in the fifth inning as Mike Zunino belted his 32nd homer of the season.

Colin McHugh replaced McClanahan in the sixth inning and the Marlins loaded the bases and scored a run on a RBI fielders choice cutting the Rays lead to 3-2.

Tampa Bay answered the Marlins run in the home half of the sixth inning on a Yandy Diaz RBI single scored pushing their lead to 4-2. McHugh stayed in the game in the seventh inning and gave up a double to Jazz Chisholm and an RBI single ty Bryan De La Cruz before being replaced by J.P. Feyereisen who got Lewis Brinson to ground into an inning ending double play. McHugh was charged with 2 earned runs on five hits in just 1.1-innings of work.

The Rays once again answered the Marlins run with one of their own on a Brandon Lowe double scoring Mike Zunino from first to extend the Rays lead to 5-3.

Feyereisen remained in the game and kept the Marlins off the board in the eighth inning.

The Rays extended their lead to 7-3 in the home half of the eight on a Brett Phillips sacrifice fly and a Brandon Lowe RBI double.

Pete Fairbanks entered the game in the ninth inning. The Marlins loaded the bases but Lewis Brinson popped out to Ji-Man Choi to end the game.

Dietrich Enns was optioned to the Durham Bulls and recalled Josh Fleming. In his return to the Rays, Fleming will be utilized in a relief role. While with the Durham Bulls Fleming saw an uptick in his velocity (94-95 mph) while working out of the bullpen in a limited one inning capacity. “I went down there at first it was to work on the cutter and just throw more strikes with the sinker and changeup throw more in the zone, pre 2-strikes.” Fleming said. “Then after my first outing they kind of switched it and said ‘hey, we just want you to go one inning, let it eat, don’t worry about just throw strikes and try to throw it as hard as you can.’ I was like alright, I can do that. That was cool, I’ve never been put in that role it was definitely different and needed to adjust to it, but it’s fun, it’s a lot of fun.”

Manager Kevin Cash admits that there aren’t a lot of teams that stacked left-handed batters, but there are several of those left-right-left or left-switch-left stacks. “To have him [Fleming] and know that with the velocity there is probably a little more swing and miss, the separation between his fastball and his off-speed pitches and he’s always been really good at putting the ball on the ground, we can catch those.”

The move to the bullpen doesn’t appear to be a permanent thing, as Fleming says the Rays still view him as a starting pitcher moving forward, but for the remainder of this year, he’ll work out of the bullpen in a short relief role. “I’ve said it at the beginning of the year, whatever way they need me to throw, whatever role, I just want to be here to help the team win. That’s my mentality is just going to be the one inning and I’ll worry about the starting when the time comes.”

Kevin Cash Dietrich Enns did a tremendous job while with the team and says the plan for Enns is to go to Durham and work on a shorter role where he can be kind of be a 2-inning guy. “Similar to what he did last night and he should have 2-3 outings in Durham to be made available.’

Nelson Cruz was out of the lineup to give him an additional day to recover from his most recent bout with flu-like symptoms. “The illness beat him up, I actually think he lost some weight.” Cash said. “He felt fine to play but I think I don’t want to speak for him, but maybe another off-day would be good and I wanted to prioritize him playing tomorrow with [Jesus] Luzardo pitching.”

Wander Franco is out of the lineup because Kevin Cash didn’t want him to play three consecutive days. “He’ll be available today if a big spot comes up.” said Cash. “He’ll be right back against Luzardo then the off day and then should be good to go.”

Andrew Kittredge threw a bullpen before the game and felt good after throwing his first bullpen off the mound earlier in the week. “The neck issue is pretty much gone.” Cash said. “We didn’t’ want it to snowball and get really cranky to where he couldn’t do anything at all.”

Wander Franco doubled in the bottom of the eighth inning with the Rays leading the Marlins 8-0. Franco, breaking an unwritten rule, moved to third on defensive indifference. Kevin Cash, while not admonishing Franco, did admit that it probably wasn’t the ideal move. “The game was probably decided right then.” he said. “It’s a young player that we talked to. We appreciate the way the Marlins went about it. We’ll try not to allow that happen again. But that’s ultimately on myself and Rodney [Linares] just to stay on top of it.”

UP NEXT FOR RAYS: 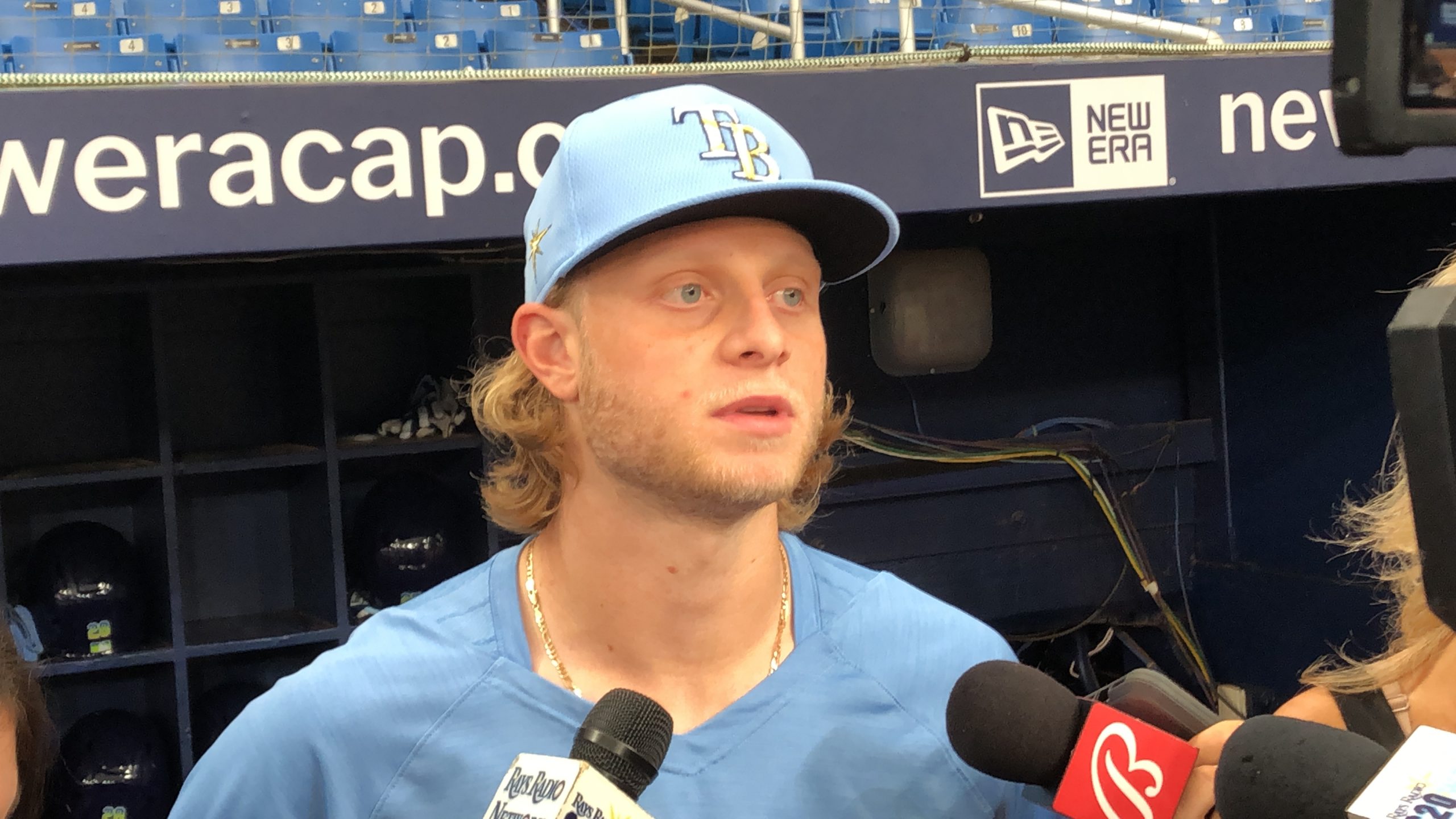 Baz is excited and a little more comfortable as he prepares for his second start after a whirlwind couple of days prior to facing the Blue Jays in his big league debut Monday evening at Tropicana Field.  “I feel comfortable, everybody’s been trying to help me just do my thing and not change anything.” Baz said.  “It’s been pretty easy getting through the last five days just to get ready for this start.”  Since his last start, Baz says it’s been mostly logistics that have changed. “Getting to talk to Zunino and getting to talk to Mejia about approach stuff, just little stuff, like everyday just trying to make sure I’m ready and stuff like that.”