Tonight many Tampa Bay Lightning fans want very badly to see their team win another Stanley Cup Championship tonight 8 pm at Amalie Arena. The Bolts face Montreal in Game 5 of the Stanley Cup Final with Tampa Bay up three games to one.

Tampa Mayor Jane Castor made it very clear that despite Hurricane Elsa set to make land near the mouth of Tampa Bay early this morning. But her news conference was before Elsa was upgraded to hurricane status and so while Tuesday after she was optimistic that could change before the 8 pm puck drop.

“If the storm — as predicted — continues on the same path, with the same amount of wind and nothing out of the ordinary happens, then we anticipate that we’ll be able to have the final game of the Lightning series tomorrow evening here in Tampa,” Castor said at a 3 p.m. press conference on Tuesday as the tropical storm approached.

Castor added she is hopeful for a home team victory in the wake of the storm.

“It would be great if we won the Stanley Cup at home, which we will do tomorrow evening,” the Tampa mayor said. 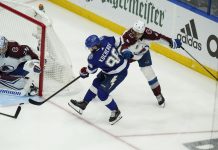