Diego Castillo (3-2, 3.86) worked a season high 2.2-innings in picking up the win for Tampa Bay who improves to 60-57 on the season. Sergio Romo worked the ninth inning earning his 15th save on the season.

The Rays have won four of five and the victory secures just the second road series win in their last nine attempts. They will look for a road series sweep on Sunday afternoon. It would be their first since May 14 through 16th at Kansas City over the Royals.

Sam Gaviglio (2-5, 4.86) allowed two runs (one earned) over 5.1-innings of work in taking the loss for Toronto who fall to 52-64 on the season. The loss extends his streak of not recording a win to 14 straight starts. His last win as a starter came back on May 25th against the Philadelphia Phillies. Toronto has now lost 7-of-8 against the Rays this season and are looking to avoid their second consecutive series sweep against them.

Ryne Stanek started for the Rays and delivered 1.1-innings of scoreless baseball handing it off to Diego Castillo who worked 2.2-innings.

Castillo entered with 2-on and 1-out and immediately hit Russell Martin to load the bases. The Jays were unable to cash in as Aledmys Diaz popped out to catcher Jesus Sucre and Kevin Pillar grounded out to second baseman Joey Wendle.

Jaime Schultz gave up the only run surrendered by the Rays staff surrendering a homer to Diaz in the fifth inning. It was Diaz’s 15th homer on the season.

Hunter Wood, Jose Alvarado, and Sergio Romo each worked a scoreless inning to secure the win for Tampa Bay.

Mallex Smith opened the game with a chopper over Sam Gaviglio’s head. Both Alemdys Diaz and Devon Travis converged on the ball but neither attempted to glove it as it roled softly into center field. Rays first base coach Ozzie Timmons alertly got Mallex Smith’s attention who turned the infield single into a double. He moved to third on a Matt Duffy chopper to short and scored on Joey Wendle’s ground rule double.

The Jays fielding woes gave the Rays an opportunity to score in the second inning and they cashed in. Kevin Kiermaier singled to center fielder Kevin Pillar whose bobble allowed the speedy Kiermaier to advanced to second. He stole third and scored on a Willy Adames groundout to short.

The  Rays continue to push the envelope on the bases leading the big leagues in stolen bases since the All-Star break (19).

The Rays received a much needed insurance run in then ninth. Willy Adames singled to lead off the ninth, moved to second on a Jake Bauers groundout, and scored on Jesus Sucre’s single. 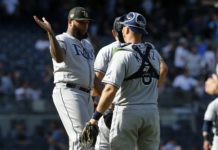