Rays Fall In Another 1-Run Loss

Diego Castillo (2-2, 4.34 ERA) takes the loss for the Rays who were swept by the White Sox and fall to 56-56 on the season. It’s the seventh time the Rays have been swept this season, fourth time in a series of three or more games. Their last sweep of three games at home came against the Philadelphia Phillies on April 13 through 15th. The Rays lose the season series to the White Sox finishing 2-4 with all 6-games being decided by 1-run.

Joey Wendle gave the Rays an early lead with an RBI single in the first. It was his bunt in the third inning that was thrown away allowing Jake Bauers to score and Wendle to race to third. He scored on Ji-Man Choi‘s sacrifice fly giving the Rays a 3-1 lead.

Ryan Yarbrough was unable to hold the lead allowing two runs in the fourth, two in the fifth, and a run in the seventh. Avasail Garcia accounted for two of the runs on solo homers in the fifth and the seventh.

Tampa Bay tied the game in the bottom of the seventh on a 2-RBI single by Ji-Man Choi. Unfortunately, they were unable to grab the lead despite having the bases loaded and one out.

Daniel Palka delivered the game winning runs belting a 2-run homer with 2-out in the ninth inning. Palka had struck out his first four plate appearances. It was also the Chisox third homer with 2-outs in an inning.

Hunter Wood opened the game for Tampa Bay allowing a run in 1.2-innings of work. He was followed to the mound by Ryan Yarbrough who allowed 5 runs in 5.1-innings. Diego Castillo worked a scoreless eighth but gave up a 2-run homer to Daniel Palka in the ninth.

Castillo has pitched to a 10.80 ER (10-ER/8.1IP) over his last eight appearances, including multiple runs in five of those appearances.

Wendle In The Cleanup Spot:

Rays Manager Kevin Cash had previously slotted Joey Wendle in the cleanup spot in his lineup. Wendle didn’t respond going 0-for-12 and striking out three times but the Rays won two of the three games.

Making his fourth start of the year in the cleanup spot Wendle found more success. In the first inning he delivered an RBI single with 2-out to score Jake Bauers. In the third inning he brought Bauers home again on a bunt single that Dustin Garneau threw down the right field line.

His day got even better as he belted his sixth homer of the year.

Brandon Lowe (rhymes with cow) was called up from Durham on Saturday to take the place of the injured Daniel Robertson. The 24 year old was drafted by the Rays in the 3rd round in 2015 out of the University of Maryland.

Lowe flew out to left in his first plate appearance and ended the day 0-for-4 with a walk.

Mallex Smith entered the day batting .382 (26-for-68) since the beginning of July. He went 4-for-5 on Sunday to push his average to .410 (30-for-83) since July 1st. The four hits matched a career high, previously done three times. It was his third four hit game this season, the last on April 16th against the Texas Rangers.

Daniel Robertson injured his thumb on a hard slide into second base against the Chicago White Sox on Friday night. On Sunday morning it was announced that Robertson would miss 6-8 weeks, meaning he’s more than likely to miss the remainder of the 2018 season.

The Rays will have the day off on Monday and then welcome in the Baltimore Orioles for a three game set starting Tuesday at 7:10 pm. Tyler Glasnow (1-2, 4.27 ERA) will make his second start with Tampa Bay.  The Orioles counter with former Ray Alex Cobb (3-14, 5.83 ERA). 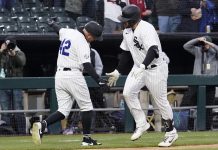