The Tampa Bay Rays are off to a surprising 28-27 start to the season. Normally, a game over .500 after 55 games wouldn’t constitute a surprise, but the forecast for the Rays was much bleaker.

After trading away Evan Longoria, Steven Souza Jr., Corey Dickerson, Jake Odorizzi, and Brad Boxberger the term “tanking” became a popular phrase. Early season injuries to Nathan Eovaldi and Kevin Kiermaier darkened the forecast even more. Getting off to a horrendous 1-8 start and losing 9 of their first 13 seemed to verify all the preseason tanking talk.

Then the Rays came back to climb above the .500 mark by the end of May. Per Elias Sports, they are the first team to get back over .500 before end of May after being 9 or more games under since the 2009 Padres.  It should be noted that the 2009 Padres finished the season with an underwhelming 75-87.

Right now, even after dealing away outfielder Denard Span and closer Alex Colome, the Rays are getting their fans excited by consistently winning series. They have won 9 of their past 14 series, compared to losing four of their last five. Overall, they’ve won 12 of their last 17 games.

Now the calendar turns to June. A time when surprise teams sink to the level that everyone thought they should be.  There are several reasons lesser talented teams suddenly come back to earth in the season’s third month.

Some players off to hot starts will regress to career or minor league norms.  Young players off to hot starts have weaknesses exposed and the book is out. Seasoned players who seem in the seasons first two months to have finally figured out really haven’t. Injuries pile up and youth from the minor leagues is unable to plug the holes. There’s probably a few more intangibles, but mostly the problem is the team just doesn’t have the talent to compete over a long period of time.

The Rays are in a position to prove their detractors wrong, but to do that they’ll have to avoid the June swoon.  The schedule makers certainly didn’t do the Rays any favors as the Rays face a daunting scheduled that most teams would have difficulty navigating.

Between tonight and July 1st the Rays play 28 games, all but three games are against teams with winning records. The following details the upcoming June schedule and the team’s current record:

The combined record for the teams on the Rays schedule is 162-115 (.584).  One team not shown in the June schedule is the Boston Red Sox (39-18).  To get a feel as to how the month of June may go, the Rays are 4-9 against Boston but have played them tough as seen in the six 1-run losses against them.

The Rays may be a nice story now. They may have surpassed a lot of the dark forecast set for them even through early April. In the end, how they play over the next 29 games will set the dark forecast out of everyone’s mind or cement the theory that they’ve punted the 2018 season.

2nd place Rays start the second half of the 2022 season behind Judge and the MLB best Yankees. 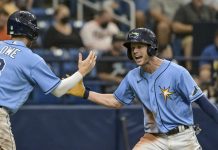