As the Buccaneers prepare to kick off the 2022 season with Saturday’s preseason home opener against the Miami Dolphins, the team has unveiled a variety of new offerings that will enhance the gameday experience for Buccaneers fans at Raymond James Stadium.

In response to an unprecedented demand for 2022 season passes, the team announced earlier this offseason an additional seating area named The Krewe’s Nest which will be located in the south end zone at Raymond James Stadium. The additional 3,600 seats will increase the stadium’s capacity to nearly 70,000. In order to make room for the additional temporary seats, the standing room-only fan section on the south end zone concourse has been removed for this season.

Krewe’s Nest patrons will be able to purchase beverage and food items from the comfort of their seats through food vendors that will be stationed throughout the seating locations. The Buccaneers and Tampa Sports Authority have collaborated to ensure that fans continue to have the ability to cross from the west side of the stadium to the east through a dedicated pass-thru lane that has been established behind the seating platform. Existing restrooms on the south concourse will also remain accessible.

“The addition of The Krewe’s Nest for this season is going to play a huge role in helping us create an unmatched atmosphere for games at Raymond James Stadium,” said Buccaneers Chief Operating Officer Brian Ford. “We are always focused on finding ways to create the best gameday experiences for our members and this is another example of that.”

Additionally, the team has introduced its first-ever expedited entry lane at Raymond James Stadium through an innovative activation with its partners at Fifth Third Bank. In July, the Buccaneers and Fifth Third Bank debuted a team-branded debit card that provides cardholders with a variety of perks including access to the Fifth Third Bank Gate Fast Lane as well as discounts on food and merchandise throughout the stadium.

“With nearly 70,000 fans expected at every home game this season, the Fifth Third Bank Gate Fast Lane will be a terrific addition to the gameday experience for those cardholders to ensure an efficient and worry-free entry through the gates,” said Ford.

And once inside the stadium, Buccaneers fans will be treated to an even greater selection of new and upgraded food offerings from Legends, the team’s hospitality rights partner since 2019.

“We know that the quality and selection of food offerings plays a large role in the gameday experience and that is why we have worked closely with our hospitality partners at Legends to continue raising the bar on all food and beverage throughout Raymond James Stadium,” said Ford. “Our fans have grown accustomed to enjoying the best hospitality options and we look forward to continuing to exceed their expectations.”

As in past years, Raymond James Stadium continues to be a cashless facility with all retail transactions requiring a credit or debit card. For the convenience of fans, there are reverse cash ATMs located throughout the stadium. All parking lots are also cashless. Fans attending games at Raymond James Stadium are also reminded that there is a no-bag policy in effect for all events. 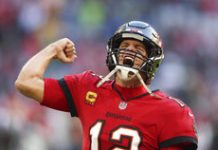