The video is from Highlight Heaven. Be sure to go to there site and support them.

ORLANDO – Tonight the Alliance of American Football gave Orlando professional football again as a thankful and loud crowd at Spectrum Stadium welcomed the Orlando Apollos home in a big way. They saw  The Head Ball Coach, a.k.a Steve Spurrier bring his “fun and gun offense,” that excited Florida Gators fans for years to Orlando as his Apollos flew past the Atlanta Legends 40-6.

One thing that makes the Head Ball Coach very happy is seeing his teams passing game work and it was hard for him to hide his excitement with what he saw as he coached his first game on opening night of the new AAF.

“OK, good win for the Apollos,” Spurrier with his signature wide smile. “Guys played pretty well. Our defense was super.”

It was a night of balance as the Apollos looked strong holding Atlanta to just six points, both field goals and caused four turnovers. But the offense also looked sharp and crisp from early and kept up the air show for the entire four quarters.

The Apollos quarterback Garrett Gilbert led the home team to a pair of touchdowns on two of the team’s first three drives. Gilbert finished his opening night with a very respectable stat line of 15 of 25 passes for 227 yards and two touchdowns.

But what kind of Spurrier team would it be if there wasn’t a trick play used by his new Apollos?

With Orlando up 16-6, The Head Ball Coach dialed up something often seen when watching Gators at “The Swamp.” Apollos wide receiver Jalin Marshall took a reverse handoff from the Legends’ 5-yard line and found an uncovered Gilbert wide open in the endzone for an easy Orlando touchdown.

“We know we’re going to have some tricks up our sleeve,” Gilbert said about playing in Spurrier’s system. “He’s going to give us the opportunity to create some big plays with some misdirection type of stuff. Our job is just to go out there and execute it.”

Here are some of the first’s we saw last night at Spectrum  Stadium – Marshall’s 26-yard touchdown pass from Gilbert early in the second quarter was the league’s first-ever TD.

Meanwhile, before fans could get seated after cheering the first score less than two minutes the Apollos scored again this time it was a one-yard rushing score from De’Veon Smith. Akeem Hunt was the team’s leading rushing with 73 yards on 10 carries.

Some postgame thoughts from the coach and the quarterback:

“I think the fans had a good time tonight, didn’t they?” Spurrier said. “They saw enough good plays after the first quarter or so, and we finally put on a little bit of a show.”

“Talking to a couple of my friends, everyone seemed to be real excited about the way the game went — the speed of it, the TV timeouts, having some guys mic’d up on the sideline,” Gilbert said. “I think that’s a lot of fun, and I think the game speaks for itself. And the level of play, I think that’s what is going to draw people to come watch these games.”

Next up – The Apollos will next play Feb. 17  at the Alamo Dome against the San Antonio Commanders with kickoff at 4 p.m. on CBS Sports Network. 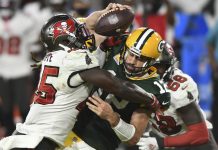 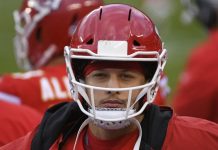