The two sides are in agreement to trade outfielder Juan Soto to the San Diego Padres, according to MLB Network. Soto, the biggest name on the market ahead of Tuesday’s 6 p.m. ET trade deadline, had previously been made available in July after he declined a 15-year, $440 million extension offer. The Padres will also acquire Nationals first baseman Josh Bell, per reports, and the Nationals will receive a package headlined by lefty Mackenzie Gore and shortstop C.J. Abrams.

First baseman Eric Hosmer is also slated to head to D.C., though he’ll have to consent to being included as the Nationals are one of the teams he can block deals to using his no-trade clause. Here’s the full deal, per ESPN:

The Cardinals and Dodgers were viewed as the other two finalists for Soto, but were apparently out-bid by San Diego. 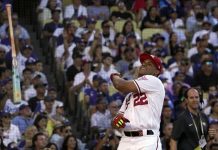 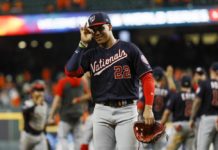 If Washington wants to trade Juan Soto, he will bring back a “Kings Ransom,” in prospects.

MLB All-Star Break News: Nationals star Soto turns down $440 million contract. The star could be traded before the end of the year.