Why was there such a massive failure to look into the Nasser rumors?

What is next for the Federal Bureau of Investigation, the International Olympic Committee, the United States Olympic and Paralympic Committee, the National Collegiate Athletic Association and USA Gymnastics after a Congressional hearing on the lack of an investigation into allegations of Larry Nasser’s sexual abuse. American gymnasts, most of them children, did not get protection from the adults who were supposed to look after them. The FBI fired an agent but Director Christopher Wray had no answers during the Congressional hearing. The USOPC overlooked the rumors that the USA Gymnastics team doctor Larry Nasser was sexually assaulting some of his patients. Nasser also worked with the Michigan State athletic department. Nasser is not the only sexual predator that seems to have eluded government agencies and athletic groups. There were also allegations that Ohio State did nothing about Dr. Richard Strauss who may have sexually abused as many as 177 student-athletes during his time as physician overseeing Ohio State’s sports programs from 1979 through 1997. Strauss committed suicide at the age of 67 in 2005. The former Penn State assistant football coach Jerry Sandusky’s predatory behavior was ignored.

The USOPC gave  $2.4 million as a parting gift to the USA Gymnastics Chief Executive Officer Scott Blackmun after he resigned when it became known that the USOPC was aware of Nasser’s behavior for some time before the Indianapolis Star broke the Nasser molestation story. The Star’s reporting documented the wrongdoing. Nasser is in jail. Why didn’t James Comey’s FBI do more? Why didn’t the sports organizations look into allegations prior to 2015?  A basic question needs to be answered. Were sports organizations afraid that millions of dollars of TV, marketing and ticket sales money would be lost if they did an investigation and the truth got out? 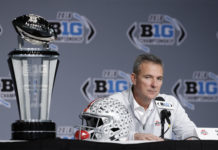 Ohio State University Has Many More Strauss Questions To Answer