Peace in our time? Not quite.

International Olympic Committee President Thomas Bach took a victory lap after the announcement came down that the United States and North Korea and its leaders would meet face to face. Bach somehow thought that he and the International Olympic Committee were somehow responsible for the possibility of North Korea and South Korea finding some common ground to improve the relationship between the two countries. Now there is no North Korea-US summit. Bach needs to be reminded that Dennis Rodman was also invited to North Korea and the former National Basketball Association player did not end the United States-North Korea War which started in 1950 and technically is still going on as there was only a truce in 1953 to stop the fighting. Rodman did not get a Peace in Our Time deal from North Korea’s Supreme Leader Kim Jong- Un but they did hang out and watch basketball together.

The IOC thinks and acts as if it is a sovereign nation complete with a flag and official permanent observer status at the United Nations. The IOC can make demands of cities that include having local taxpayers pick up the bills of cost overruns at an Olympics or close off roads in order for the IOC’sofficials to get to a venue without having to sit in traffic. But it is up to local politicians and elected officials to cave and give into the IOC. When it comes to real world issues, Bach and the International Olympic Committee are paper tigers and have no teeth. The IOC puts on a show filled with smoke and mirrors. The IOC placed an Olympics in Beijing in 2008 and in Sochi in 2014 despite protests from human rights organizations about China and Russia’s policies. Bach never addressed North Korea’s human rights issue but neither did Dennis Rodman. But Rodman is no diplomat and neither is Bach. The Games Must Go On. 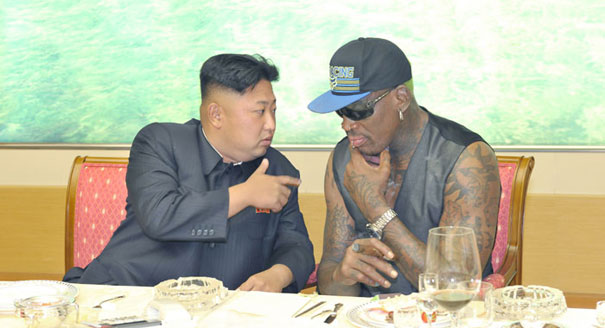 Dennis Rodman might be a more polished diplomat than Thomas Bach.