The 22nd ranked UCF Knights put in easy work against ECU and picks up their fifth win of the season by the final score of 63-21.

“I think our quarterback is playing really well, our offensive line gets better and better every week,” UCF head coach Scott Frost said. “We’ve got some real weapons. Jordan Atkins and Tre’ Quan and AK and starting to develop some more weapons.”

The Knights started off the game on a bang, going four plays, 75 yards and a 48-yard touchdown by Tight End Jordan Atkins in 1:16. Once that happened, you knew it was going to be a long night from there.

From there, the Knights ‘UCFierce’ defense made ECU’s quarterback, Thomas Sirk shook from the very beginning of the game. He looked like a lost child out there for the most part in the entirety of the game.

One thing to recognize early in the game was the Knights put an emphasize of getting Adrian Killins the ball in space early and often. Killins’ first quarter stats were six carries, 46 yards, and one touchdown. He also had one catch for 12 yards. That’s 58 yards of total offense in the quarter. 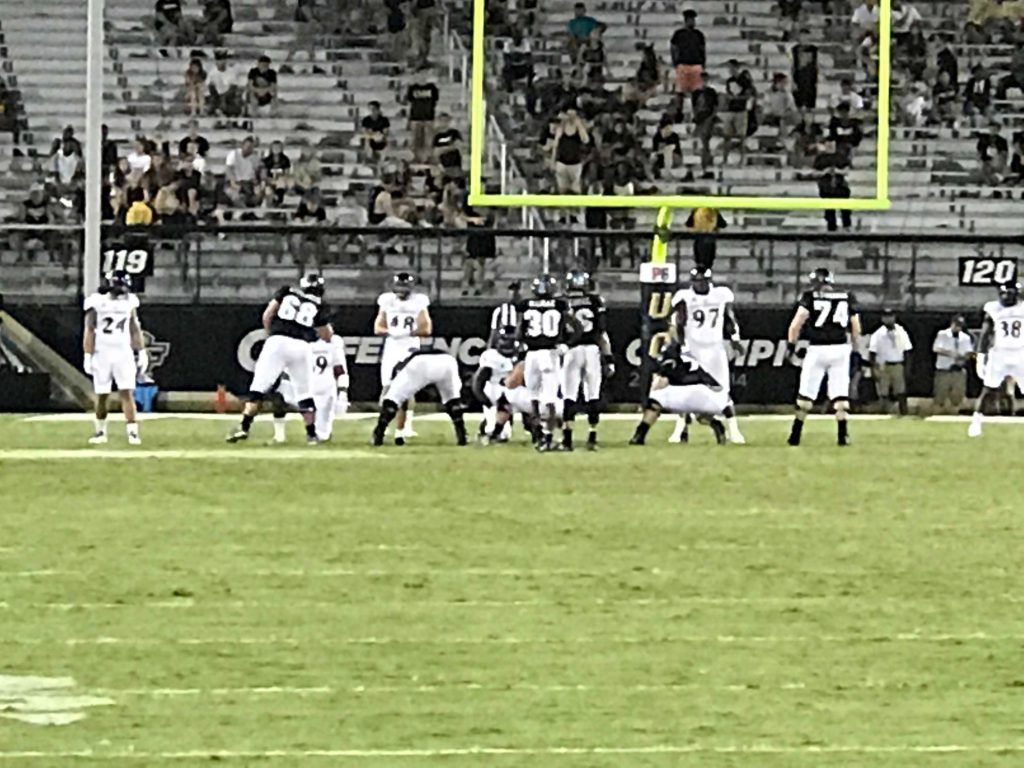 As for McKenzie Milton, he had another stellar performance in the game. He went 19-22, 291 yards, two touchdowns in the first half alone. He finished the game with 21-27, 324 yards and the two touchdown passes which is now his third straight game with at least two TD passes in one game.

One of those touchdowns was caught by Defensive lineman Jamiyus Pittman. It may have shocked almost everyone but not Pittman.

“I knew from the jump that I was going to have a pass in,” Pittman said. “So, I was just blocking hard for my running back until it was my time.”

Milton is making a case for the Heisman award this all-around performance this season but won’t get it unfortunately due to the competition that they are playing against in the AAC, but it doesn’t hurt to dream.

“I try to stay even kill, not to get to high, not too low,” McKenzie Milton said. “So, week in week out, there’s always something on the line, and you always have to go out there perform.”

The defense for the Knights was a force of nature throughout the entirety of the game as well. UCF kept on delivering hit after hit that put all ECU players on notice and made them shook. They looked as if they were walking on their tippy toes for most of the game.

This big win is another step in climbing up the ranking ladder for the Knights. They will most likely be getting into the top 20 when the AP polls come out on Sunday as both Clemson and Washington State both were upset.

Navy was upset by Memphis, the same team that the Knights dominated a couple of weeks ago to get into the top 25. The current 18th ranked USF struggled in the first half against Cincinnati and 17th ranked Michigan almost got upset by Indiana. Expect the Knights to be in the top 20 in the AP polls on Sunday.

With this easy win, the Knights are now 5-0 (3-0 AAC) on the season and will be hitting the road next Saturday against Navy.