After two rounds, the leaderboard is tightly-packed

They call Saturdays in golf tournaments “Moving Day.”  After an unpredictable start at Erin Hills, and a low cutline at +1, there is a lot of moving to be done.

On Thursday, Erin Hills played a little easier than expected, creating a unique and strange leaderboard.  Friday made things even more interesting, as the lead did not go any lower than it was on Thursday, allowing more players into the chasing pack.

There are four co-leaders after the cuts have been made, and dozens more who are close enough to the lead to have a reasonable shot at the US Open.

Erin Hills showed its teeth after a first round where it looked like anything but the intimidating US Open course many expected.  After Thursday’s round, the leaderboard was as red as a mismanaged business, led by Rickie Fowler at -7 through the first day.

Conditions really led to Erin Hills being easier than expected at the start.  Days of rain in the buildup softened the greens, which were designed to keep balls rolling down false fronts and off into danger.  In soft conditions, that simply hasn’t happened, and combined with greens that are slower than expected because of the wetness, a talented and loaded field went into attack mode.

That isn’t to say the course played too easy on Thursday for everybody.  Dustin Johnson struggled to find the fairway, as did Jon Rahm who let his emotions get the best of him.  Of course, before you tsk that away too loudly, I think every golfer can remember being there once or twice.  Bubba Watson had the same trouble, getting in his own head after a disappointing hole and watching entire rounds unravel in front of him.

Kevin Na, he of the Instagram video that inspired everyone’s favorite golf hot takes, played extremely well on Thursday and finished the round -4.  Meanwhile, Rory McIlroy, who had defended the course’s wide fairways, couldn’t keep his golf ball in them and hardly even threatened the cutline during his two rounds.  Na, for his part, is even through two rounds after Erin Hills took a little bit of revenge for a social media dig to which golf courses cannot respond due to a lack of thumbs.

Twenty-three players are within four shots of the lead.  It’s a group that includes the low amateur (Cameron Champ, -5) who will be playing with a Tour rookie (Xander Schauffele, -5, who even tied for the lead at points on Friday).  Sergio (-3) is in that pack, as is Players Championship winner Si Woo Kim (-5) and second-on-the-money-list Hideki Matsuyama.

Of them, it’s Matsuyama who holds the momentum.  On Friday, low scores were hard to come by, yet Matsuyama went -7 to get himself back in this US Open after a rough Thursday.  The 25 year old’s 30 on the front nine was one of the stories of yesterday’s second round.  Coming into 2017, Matsuyama was a popular pick to have a breakout year as one of the most consistent ball-strikers on tour.

The four players with a share of the lead are:  Paul Casey, Tommy Fleetwood, Brooks Koepka, and Brian Harman.  None has won a major before, a common theme throughout the contenders coming into the weekend rounds.  Of that crowd within four shots of the lead, only two players (Garcia and Martin Kaymer) have ever won a major before, and only Kaymer has won the US Open in the past.

Outside of that large group, there are a few people off the pace that could still make a run.  Andrew “Beef” Johnston, one of the internet’s favorite professional golfers, has made the weekend at -2.  So has Justin Thomas, who got off to that great start in the early season.  Ernie Els is holding that same score.

Jordan Spieth made the cut at even, and while he’s a bit off the pace simply making the weekend is an accomplishment.  On Thursday and Friday, Spieth battled inconsistent putting that has proven the difference between playing on the weekend and contending.  Had some of those birdies fallen, he would be lurking on the leaderboard.  One of the earlier tee times, he’ll be on television right as the broadcast begins.

With that in mind, have a brief viewing guide for a Saturday that could be one of the crazier moving days in recent memory.

The broadcast begins at 11:00, Spieth, Matt Kuchar, and Zach Johnson will all be out on the course when Fox starts rolling.  Watch Spieth in particular to see how conditions are going.  As the course dries out over the weekend (though there could be rain on Saturday) it will only get tougher, but if Spieth goes low or shows hints of it we could get a fireworks display in the afternoon when the leaders tee off.

At 11:49 Eastern, Patrick Reed tees off at -1.  Making up six shots with so many people between him and the lead seems highly unlikely, but Reed has shown flashes of brilliance at this tournament and could be an early mover.  Also keep in mind that Erin Hills has played easier earlier, and by late afternoon becomes tough for this field.  A good round by Reed could put him within striking distance depending on changing conditions.

Kevin Na tees off at 11:38.  He’ll be one of the guys out on the course early.  Since he’s been in the golf news this week, he might make a fun figure to follow.  With two very different rounds, he could go low or he could find himself in that fescue he enjoys so well.

Thomas is off at 1:06, still early enough to make some headway but he’ll have a long climb ahead.  Having carded a score below 60 this year, we know Thomas can go really low, but he’ll need more than just his own scoring to get back in it.  Beef Johnston and Adam Hadwin (the rare Canadian on Tour) go right after Thomas.  It’s worth watching Johnston because he seems like a throwback to the pre-Tiger era.

Garcia’s tee time is at 1:39, right when we start to get into the contenders.  Sergio’s transformation from somewhat controversial figure to crowd favorite is complete, and he’s getting some of the warmest receptions of anyone at Erin Hills this week.  Garcia is also the last major champion to tee off.

At 2:01, Charley Hoffman tees off.  Hoffman is 4o, making him the oldest player in contention for the tournament right now.  He’s had some of the most accurate shots of the tournament thus far, and if he can keep it up as the greens keep drying out he’s in with a chance.

Matsuyama’s off at 2:34, another afternoon tee time after he used his late time yesterday to rock the course.  It seemed at times Friday evening like Matsuyama had figured Erin Hills out while the rest of the field was starting to see what Kevin Na was talking about.  Another day like that today, and moving day could be Matsuyama Day.

At 2:45, the most unpredictable pairing gets to the tee.  Xander Schauffele, Tour rookie, goes out with low amateur Cameron Champ, both just two shots off the lead as Saturday begins.  It’s likely that we will have a first-time major champion at Erin Hills, but of all of the possible champions nobody would be as surprising as the two players in this group.

Rickie Fowler tees off at 3:07, one shot back.  He’ll have to display mental toughness early on, as his back nine on Friday was rough and sent him from the lead back to the pack.  Fowler had been as low as -9 at parts of Friday’s round, and had an opportunity to seize control until he started missing his targets down the stretch.  Still, at times this week he has looked like the best golfer out there, and another day like that could put him in prime position.  The early holes are about getting back on track, and then he has to shift into thinking like a major champion.  He’ll have his 2015 Players Championship to look back on as his closest reference.

Fleetwood and Koepka go at 3:18, followed by Casey and Harmon at 3:29 for the final tee time of the day.  The four leaders at -7 hope the day plays out opposite to the first two:  High scores in the morning, and lower ones late.  That would give them the chance to separate from the field. 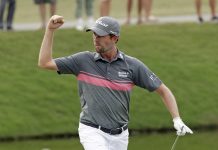 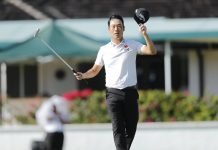 Kevin Na has a big finish and wins the Sony Open 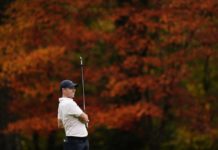 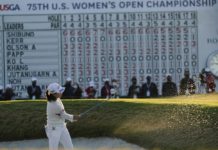 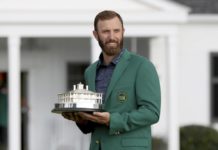